The relieved and satisfied crowd of Dems at Café Tivoli showed no signs of impending doom with Suarez set to face a judge in October for corruption charges. And why should they, they won. The rain clouds are beyond the horizon.

“For a whole year,” the scrappy and determined mayor told PolitickerNJ, “all the council has done is try to get me out of office. This was a complete waste of money for the taxpayers.”

The Republicans agree that it was a waste – somewhere upwards of $14,000 – but the burden was on Suarez, they said today, to step down (or not get arrested) in order to have avoided it.

Now the opposition will have to wait for Suarez’s regularly scheduled election next November, or maybe root against Suarez as he faces justice this fall. And they will, Suarez said, calling out Republican Chairman Bob Avery, foremost.

“He didn’t care about how these turns took their toll on my family,” Suarez said, blistering Avery for inciting rallies in front of his house after the arrest.

“Like the Salem witch hunt,” Suarez said. “I had to get my wife and kids out of there.”

His expectations for the day were tempered by the summer threat of vacationing supporters, and first-time absentee balloters. But the town rallied behind Suarez in his time of need, even though he is alleged to have abused his office.

In his defense, one supporter pointed out a part of the FBI complaint that takes place just after Suarez and his co-defendant Vincent Tabbachino discuss potential development favors and cash payments with the CW, cooperating witness and purported developer Solomon Dwek. His supporters believe Suarez shoots holes in any quid pro quo argument with this back-and-forth. “That” is $10,000-plus in alleged payoffs and “you know” is the alleged development approvals.

“Defendant Suarez replied ‘that has nothing to do with, you know,’ to which the CW stated ‘(c)all it what you want,’ ” the complaint reads. “The CW stated ‘I’ll do it through Uncle Vinny,’ prompting defendant Suarez to state ‘it’s not like a mixed thing, but you know, whatever . . . they’re separate things.'”

Suarez is also quoted in the complaint saying, “(W)hose ever (development) it is, like I said, I will, um, as, as long as it’s good for the town, that’s what I’m trying to do.”

Today, it may have paid off. Even on his slippery slope, Suarez wooed voters and rallied his base. 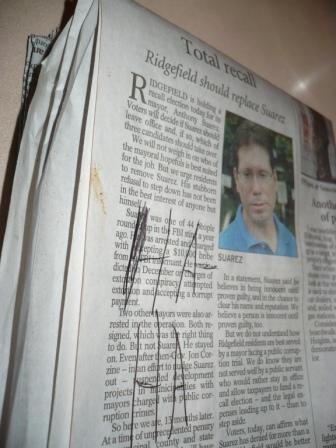