Christie earlier this year slashed $820 million in education funding, including $120 million to Bergen, resulting in the job loss of 1,300 teachers in this sprawling northern county. This week, in an effort to undo in part Christie’s efforts at the state level, Lautenberg successfully shepherded federal legislation through the U.S. Senate that would restore $268 million in federal funding to education and help retain or rehire 3,900 teachers statewide.

On Tuesday, the U.S. House is scheduled to vote on its version of the bill, which nationwide would provide $10 billion for additional support to local school districts.

“As we stand here at Paramus High School today, I urge my colleagues in the House of Representatives to pass this critical legislation and provide our children with the educational opportunities they deserve,” said Lautenberg. “We need to keep our teachers in the classroom and off the unemployment line.”

“You can’t look at it through a sour eye,” Lautenberg told PolitickerNJ.com, when asked what happens next year if his legislation passes and then the federal aid dries up, burdening taxpayers with teachers who will have been strung along for an additional year with essentially an unfunded mandate.

“We will look at it next year, as it goes along. I hope the economy improves.”

It was no accident to have Lautenberg planted on the issue in torque point Bergen, where Democrats hope to withstand an aggressive challenge to McNerney by Clerk Kathe Donovan and a Christie-energized Republican Party. Wounded by the trip-up of former Bergen County Democratic Organization Chairman Joe Ferriero (tried but exonerated for theft of honest services), guilty verdict in the case of state Sen. Joe Coniglio (D-Paramus) and ongoing intra-party fighting, the still-standing ravages of the BCDO want to retain control of a county they ruled for a decade with Ferriero.

As a strong man sub on the party landscape, conveniently targeting a town that sits within the Congressional District of movement conservative U.S. Rep. Scott Garrett (R-Wantage), Lautenberg was happy to inflate the political conflagration here to a philosophical divide at the national level.

“We got two out of 41 Republicans to vote for this (education funding legislation),” the senator said. “Can you imagine that? Thirty-nine voted against it. Governor Christie can’t derail this funding. I’m a citizen of this state, which has a good record of scholastic achievement. It’s imperative that we give our students the tools they need to succeed. This isn’t a factory. Schools are not here for students to sit in, in a precise place and then go home and get out of here. We need to ensure funding for sports and other programs for our young people.”

Given his record, Garrett looks like a no-vote lock next Tuesday.

“The congressman is more than happy to vote for legislation that puts Americans to work and jump-starts the economy,” said Garrett spokesman Ben Veghte. “I think it’s doubtful that this bill accomplishes either of these.”

In front of the high school this afternoon, Randi Meiseles, a self-identified laid-off guidance counselor, gripped Lautenberg’s hand. “Because of you, I might be able to get my job back,” she said.

But Bob Yudin, chairman of the Bergen County Republican Organization (BCRO), harrumped off the Lautenberg press conference as the efforts of an out of touch lib.

“The senator doesn’t get it,” Yudin told PolitickerNJ.com. “We have had huge deficit spending under eight years of his party’s rule here. It has destroyed our economy. The state and governor can’t print money. He can at the federal level. His attempt to undo what the governor is trying to get his arms around is typical. Frank Lautenberg is a big spender. His whole career has been characterized by outrageous overspending.

“By the way, it’s interesting he says he’s a New Jersey resident,” Yudin added. “I’ve heard he spends more time at his wife’s residence in New York, and you can quote me on that.”

Not present for today’s pres conference, U.S. Sen. Bob Menendez (D-Hoboken) was also instrumental in ramrooding the legislation through the U.S. Senate this week. In addition to the $268 million for teachers, the bill would provide New Jersey with an additional $399 million in Medicaid funding.

“I want to thank Sen. Lautenberg and, of course, Sen. Menendez for this,” said McNerney. “Today’s my eight-year old daughter’s birthday, so this effects my family personally. These cuts of Gov. Christie’s will result in higher property taxes in Bergen County. We have to keep these families employed in tough times.”

“I’m really disappointed,” he said. “It shows a lack of foresight. In my 25 years in law enforcement – and military police before that – I have first-hand knowledge of how government commitment to education has a direct impact on making a community safer.”

A little more than a week after a federal court ruled not guilty in Ferriero’s case and chalked a loss in the column of former U.S. Attorney Christie, McNerney said he doesn’t anticipate any campaign presence for the storied former BCDO boss.

“We have a new president and a new governor,” McNerney said. “Certainly, after last week, people are questioning why (Christie) went after him (Ferriero). We’re not talking (Ferriero and McNerney). We’re out here talking to the people. …Bergen County is very pro-education. We are struggling so much at this time, we will take whatever assistance we can get at this point. If he (Chris Christie) wants to stand on philosophy, however ill advised, that’s up to him.”

A resident of Paramus as a child, the 86-year old Lautenberg told the crowd of politicos and reporters massed outside the high school, “I am not Abe Lincoln and I wasn’t around at that time. But when I tell people I used to live here by the firehouse, people obviously ask me, ‘How did you get anywhere, foot or horseback?'”

“On behalf of the 200,000 members and households whose jobs have been saved, I want to say thank you for getting this legislation passed,” said the number two man of an organization whose wranging with the Republican governor went into overdrive when Christie unveiled his FY 2011 budget.

Lautenberg’s handlers said they don’t know yet if the senator would appear in Bergen on a regular basis as the freeholder and county executive campaign intensifies. PolitickerNJ.com asked Lautenberg if he anticipates making appearances with Congressional incumbents U.S. Rep. Jon Adler (D-Cherry Hill) or U.S. Rep. Rush Holt (D-Hopewell Twp.).

“If they need it, I’ll be there,” Lautenberg said.

“Jon’s a smart guy,” he added of the 3rd District Dem running for re-election in a longtime GOP dominant district against former Philadelphia Eagles star Jon Runyan of Medford.

The South Jersey Democrat Adler surprised – and angered – base Dems when he voted against President Barack Obama’s healthcare reform. “A bright guy,” Lautenberg said, “but more conservative than I thought he would be.” 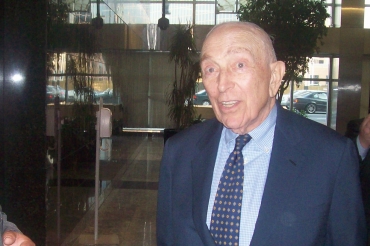