Whether or not the Republicans’ Freeholder candidates have been ushered in by Bob Yudin, the Bergen County Republican Organization chairman, is disputable. Whether or not Yudin is responsible for their success is not.

Recently re-elected chairman for a two-year term, Yudin is actually pretty safe. But in a party showing signs of fracture, winning heals all. And if Yudin’s freeholders lose, he may be relegated to lame duck boss next year.

According a GOP source, Yudin’s job may be riding on his candidates’ success in Battleground Bergen.

Last year, Yudin worked hard for, but initially didn’t back GOP Freeholders Rob Hermansen and John Driscoll. Yudin lost some political capital, but he handled himself on the campaign trail well enough to get credit after Hermansen and Driscoll won.

This year, Yudin guided the other two candidates, Maura DeNicola and John Felice through a primary skirmish before his best-bet candidate, Rochelle Park Mayor Frank Valenzuela, left the ticket with health concerns.

Now Yudin has tapped Valenzuela’s successor, John Mitchell, assuming the BCRO approves his nomination. Mitchell is short on political experience; he has none, although he fought hard last year in the Cliffside Park council race.

Mitchell is said to be a capable, but detractors said he lacks the big bullet points to quickly get voters interested.

“There’s always a few malcontents,” Yudin said. He defends Mitchell and his appeal as a candidate: “An attempt to reduce a lost plurality (in heavy Democratic areas like Cliffside Park).” Not to mention, the clock is ticking. The party has until September 15 to fill the vacancy.

Yudin points out that Driscoll never held office before his election last year, “and he’s an outstanding Freeholder.”

They are not Yudin’s picks, Cardinale said; he was in a room when the unanimous decision to draft Mitchell was made by a nine-person “kitchen cabinet.” Then all the district chairs gave their blessing and the rest fell in line.

The organization will take a vote on Thursday and nominations will be accepted from the floor, but none are expected, according to insiders.

By organizing before a vote, Bergen’s Republicans avoid potentially allowing party differences to be aired in a contentious floor vote or resigning. But they are slowly approaching the strong-arm regiment followed to their Bergen counterparts under former boss Joe Ferriero.

Another inside complaint is that Yudin is controlling the finances, rather than appointing a finance chair as many other county party orgs do.

“I’m handling finances, but that’s neither here nor there,” he said.

“Well, we may talk about that later on,” Yudin said, noting that Raia is very busy organizing a fundraiser at his home. Gov. Chris Christie will be the honored guest.

Beyond bickering over who picked who and whether the best candidate landed on the slate, the party wants to be united, every source confirmed. They want this election. They need this election. But maybe, just maybe, Bob Yudin needs it most. 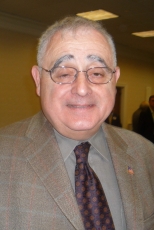