As part of an unofficial launch to the season, Gov. Chris Christie will campaign publicly with 3rd Congressional District GOP nominee Jon Runyan on Labor Day weekend, according to the Runyan campaign.

Christie stood with the former Philadelphia Eagles offensive lineman on primary night, when the Republican registered a convincing victory over his anti-establishment challenger. But “this will be their first public event where they will actually be out meeting voters,” said Runyan campaign consultant Chris Russell.

The Labor Day launch with the governor will come on the heels of a fundraiser for Runyan this Friday evening, which the governor is also scheduled to attend, according to Ocean County Republican Committee Chairman George Gilmore.

“The governor will be there and we expect to have a good turnout as we work to unseat (Democratic Congressman) John Adler,” Gilmore told PolitickerNJ.com.

Christie’s fundraising appearance with the congressional candidate is set for the Holiday Inn in Stafford Township. Ocean County Republican sources say the goal is to pull in between $150,000 and $175,000. 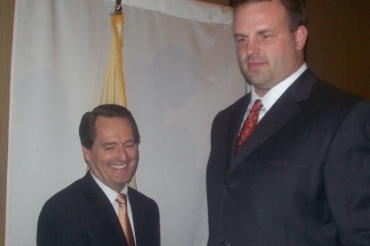