On women’s equality day, not all women were elected equally.

As women lawmakers celebrated the 90th anniversary of the day women were given the right to vote, some had critical words for the state’s highest ranking female elected official: Lt. Gov. Kim Guadagno.  Guadagno is the state’s first Lt. Gov., and in her role, is often seen at Gov. Chris Christie’s side during press conferences and bill signings, but rarely does she weigh in.  Her silence has led some lawmakers to call her an “armpiece’ to the governor.

And as a battle has played out in Trenton over funding for family planning centers, the women at the heart of the issue have not found an ally in Guadagno, despite her historic position.

At a press conference commemorating women’s suffrage, Sen. Majority Leader Barbara Buono (D-Metuchen) and Assemblywoman Linda Greenstein (D-Plainsboro) were asked about Guadagno’s support during their push for the $7.5 million in funding, a bill that was vetoed by Christie, despite the lawmakers’ claims that they had found the funding for the bill.

Greenstein said Guadagno’s role was typified recently when she asked the Lt. Gov to help find funding somewhere for the 40,000 females without health insurance who use the clinics.

“Could you help with this?” Greenstein asked Guadagno in the statehouse halls.

At the same time Gov. Chris Christie started heading down the hallway, and Greenstein said Guadagno pointed to her boss and said, “Ask him?”

Guadagno did not comment directly in the veiled attacks from her fellow electeds, but Christie spokesperson Michael Drewniak said, “It’s pretty sad that on women’s equality day Assemblywoman Greenstein would take this opportunity to take political shots at a woman who succeeded as well as the lieutenant governor has.”

For Guadano, the closing of clinics isn’t a women’s issue, it’s a budget issue, Drewniak said: Supplemental expenditures without funding added into the budget after legislative approval.

“The lieutenant governor has represented the administration’s position pretty thoroughly on the topic,” he said.

And that may be part of the same question: What, other than support the governor, does Guadagno do?

Buono said that was the exact question asked when they created the position of lieutenant governor. She said today it seems that the role  is mostly defined by the governor, and in this case Christie has Guadagno limited to “ministerial” duties.

She didn’t – even ceremonially – sign a bill into law while Christie was on vacation. It was somewhat historic: The very first lieutenant governor in action. But nothing? 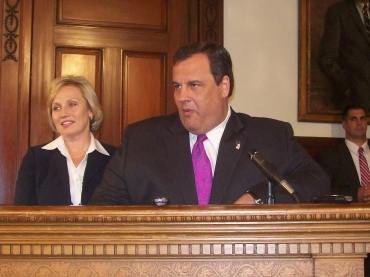