TRENTON – Gov. Chris Christie manned up today over millions of dollars lost in federal Race to the Top educational funding – then he explained how the state’s mistake could have been reconciled if not for the Obama administration.

“Obviously a clerical mistake was made,” he said, while lumping responsibility on himself and Department of Education Commissioner Bret Schundler.

One piece of paper out of the entire 1,000-page application – Christie had one handy to show off – with a 700-page appendixes was not right. One page, the data from which was available online and verbally communicated by Schundler in his application interview two weeks ago. But, alas, that was all it took to lose the Race to the Top. “I’m not going to fire someone over this,” Christie said.

“If you’re a normal, thinking, breathing, human being you pick up the phone,” he said of the federal snub over a sheet of data. “This is the stuff that drives people crazy about government…Does anyone in Washington D.C. have a lick of common sense?”

“This is the reason the people are angry at the president of the United States,” he said, noting that the state would wait for an apology from the federal government.

Democrats, like Assemblyman Paul Moriarty, were calling Christie to the mat yesterday as news broke. “This is an appalling and inexcusable mistake that will cost taxpayers and children alike,” he said in a press release. “A gaffe this terrible on something this important to New Jersey’s children is, quite simply, inconceivable.”

Christie’s response: “All that is is a partisan claptrap. They don’t even know that its one sheet of paper.”

“Jump on my back, have a party,” Christie said of the political pile-on. “They should really get back here and get back to work on substance.” He also encouraged them to write letters to Secretary of Education Arne Duncan: “Come on Arne, let’s get with it.”

Christie chastised the unions for sounding off on the lost money, especially since their endorsement – like unions in Florida, New York, and Ohio – would have netted the state more point in the race.

“I’d probably have to pay them to take responsibility because that’s the only thing they respond to,” he said. “Candidly, they’re asinine.”

But, as one reporter today pointed out, the states that bagged the cash have elections coming up or are eastern Democrat-controlled states. Politics at play?

“Ask the Obama administration if Rahm Emanuel had a checkbox,” Christie said. “I observed that as well.”

“We didn’t anticipate the funding,” Christie said, so there is no budget hole to fill, but Schundler informed Christie today that $100 million of federal money for school reform is still left over and the administration is asking if they can have some. But at today’s press conference, he surely wasn’t trying to kiss up in order to get it. 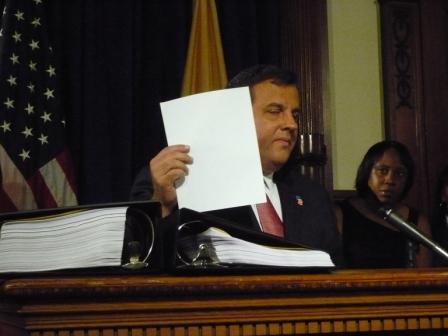