JERSEY CITY – There was no vote tonight, but the Jersey City Board of Education is supporting Schools Superintendent Dr. Charles Epps, Jr. and his $268,200-per-year contract. Sources have confirmed that Epps will find the votes when the time comes.

For $268,200 per year, Jersey City is getting a battle-scarred ex-Assemblyman who has the support of Sen. Sandra Cunningham (D-Jersey City) and other local officials. It is getting what the people want, Cunningham said after taking a casual poll of the more than 100 people crammed in a conference room on Claremont Ave.

Jersey City is also getting 35 out of 40 schools that are failing under Epps, at least in the eyes of the state.

One thing Jersey City is not getting is a superintendent search.

The hullabaloo over the beleaguered school chief’s contract extension may have something to do with his salary, his personal car and cell phone, his $10,000 per year annuity, or his 490-plus sick days worth more than $86,000. It could be because the city of 240,000 people has a budget of $520 million while the school district, population 30,000, has a budget of $630 million. Or it may merely be the grounds on which a political turf war is being fought.

The entrenched majority repeats their reasoning for keeping Epps: leadership stability, born-and-raised, crippled by a lack of parental involvement. As for the test scores, well, they claim it’s a matter of the powers-that-be moving the goalposts.

Above all, they say, the crusade to remove Epps is politically motivated. Even worse, they say it’s racial.

A leader in the charge against Epps is Sterling Waterman, a new member of the school board and an African American representative of the new guard.

Waterman downplayed the race card in an interview (the board members did not speak at the meeting), as did other black residents who spoke before the board. It isn’t racial, they said; it’s a matter of finding the best person for the job, hence the superintendent search of which they invite Epps to be a part of.

Epps is “homegrown,” said Freeholder Jeff Dublin, the theme of his well-received five minutes at the mic. “People who criticize, I look at ’em and say, How long you been in Jersey City? …Have you ever seen a tree grow in Jersey City?”

The minority opposition to Epps grows because progress isn’t readily apparent in the district, argue the critics – among them Councilman Steve Fulop, who organized an online petition drive opposing the Epps contract.

Fulop is a “yuppie” – a young urban professional – by Hudson standards, who is making a power play in Jersey City. His first move was to elicit unprecedented voter turnout for three Board of Education candidates he backed in April, including Waterman. On the losing side of that battle was former Jersey City Mayor Gerry McCann.

On Wednesday, McCann slung a conspiracy theory into the already-hyped crowd, alleging that Fulop was pushing his own superintendent candidate.

McCann, who did two years in a federal prison for a savings and loan scam, slowly ignited the crowd with his counterplot.

He framed Kathy Coyle, an assistant superintendent in Elizabeth, as the guilty party who called McCann claiming she had four votes on the board and needed the vote of Board of Ed Commissioner Sean Connors, a McCann loyalist, to seal the deal.

Coyle was a campaign supporter, he said, of Fulop, who McCann fingered as the puppetmaster.

“If this worldwide search, this nationwide search… If we think that’s all the sudden going to send our children to Harvard, we’re kidding ourselves.”

Fulop arrived twenty minutes later to retort, noting that all three of the candidates he backed in the race voted three different ways: one for, one against, and one abstention on the Epps contract. That snipped the proverbial puppetstrings.

“I don’t support Kathy Coyle,” he said, disputing McCann’s scenario. Fulop pressed for a bona fide superintendent search, not “Jersey City-style where you do a search on your block.” Then Fulop promptly exited.

Assemblyman Charles Mainor (D-Jersey City) hammered home that Epps is Jersey City’s own. “It should be somebody from Jersey City. Jersey City is very unique. You have to know us to love us.”

Dublin took a shot at Gov. Chris Christie’s education czar and another former mayor of Jersey City, Brett Schundler, who supports a search. “I could care less what the commissioner of education says,” Dublin announced from the microphone. “He’s a stockbroker, not an educator.”

Alan Guenther, a spokesman for the N.J. Department of Education, said this week that the state is not answering questions about the contract.

The institutional support tonight was tough on Schundler, and Connors questioned after the meeting why the native didn’t attend. In an interview this week, Connors said there was no downside to a search, but, “Are they gonna know 2 + 2 if we replace Epps? I’m gonna say no (to a search).”

He put the majority of the blame on the students’ parents. “I’m happy with Dr. Epps’ leadership. It’s everyone’s problem. (As a board member,) I’m one of the one’s at fault for what’s taking place.” Connors, a Jersey City detective, also called Fulop out for sticking his nose in board business. “He’s never been at a meeting.”

“Did everything go downhill (in the schools),” Connors said, “or did (Fulop) see an opportunity where he wants to run for mayor?”

Epps tried his best to continue avoiding the press, but, cornered, he told PolitickerNJ he thought the contract was fair and wasn’t surprised that the opposition was blasting him for the failing schools. “You always get attacked on your record,” he said.

With the conversation conveniently interrupted by a man from the crowd, Epps half-offered the guy an assistant principal job. But the man was from New York, so no dice.

How about the car? Is it necessary?

“It’s not necessary but it’s a part of the package,” he said, and has dated back to the state-control days in Jersey City when trips to Trenton were frequent.

He wouldn’t comment on whether politics is at play.

Board President William DeRosa announced at the onset of the meeting that board members would have a chance to sound off after the residents, but the board went into closed session as soon as the public was exhausted to consider adjustments to the contract. Once complete, it will be submitted to the county for approval, Hudson County Superintendent of Schools Tim Brennan confirmed at the meeting.

Brennan told PolitickerNJ earlier this week that he was confident the board would find a resolution, and that they hadn’t broken any rules in their proceedings. He applauded their attempts to hear from the public, but unfortunately the public spoke into a void on this night; no one spoke back.

The board will schedule the vote once they have Brennan’s approval, said DeRosa, potentially at their next meeting on Thursday, Aug. 26. 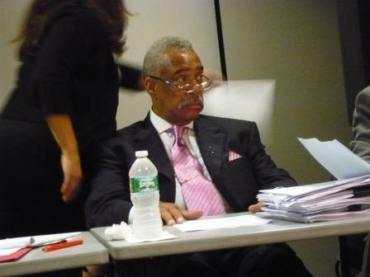