NEWARK – The potential shrinkage of Essex County Democratic Party representation could mean the loss of an African-American senate seat in a delegation where black numbers have already dwindled.

Essex ties Bergen as the county with the most state senators: six, and while that’s meant a ten-year Democratic Party power surge in Essex with five of those six seats occupied by Democrats, party leaders are now quietly bracing for the possibility of losing one of those seats next year as Republicans make a play for bulking up in a growing county like Ocean, home to just three senators.

If Dems must loss an Essex seat, much of the speculation centers around Republicans and Democrats teaming up to deep-six state Sen. Richard Codey (D-Roseland).

“Kevin O’Toole wants Codey’s head on his wall,” said a South Jersey Democratic Party operative, in reference to the Cedar Grove senator who is likely to occupy a seat for the GOP on the redistricting commission.

Now, the latter cooled her maverick cred once she went to work for the county – a move that could go either way on her in a political firefight.

The senior black elected senator and fourth senior tenured member of the state senate, Rice never folded into the organization. A rogue senator whose foes over the last three years have included North Ward Democratic leader Steve Adubato, Mayor Cory Booker, and the state AFL-CIO, Rice, in particular, may find himself up against tactical changes from an opposition that in 2007 failed to beat him on the currently configured map.

“I usually don’t care,” Rice, first elected to the senate in 1986, said of redistricting. “I leave it to the voters, and I don’t think the population has changed that much.”

But Rice cares enough to insist that the redistricting commission have a minority member.

“The chairman has assured me that will occur,” he said, although the likely commissioner will be Assembly Speaker Sheila Oliver (D-East Orange), a close ally of Rice’s intra-party political enemies.

While confident of his survival skills, the senator has other preoccupations.

When Rice first started serving in the state senate, he was one of two African-American senators, a number that grew to six before the back-to-back indictments of Wayne Bryant and Sharpe James eliminated two black senate seats. Ruiz – and later Donald Norcross (after a warm over period by Dana Redd) – replaced the two African-Americans, dropping the number now to four.

“We see what’s happening,” said Rice. “When Senator Redd left, they could have made sure we had at least five but South Jersey put in his (South Jersey power broker George Norcross), brother. That’s fine, but there was no consideration of an African-American senator. They talk diversity, then every time there’s a change in leadership we lose an African-American. They make a decision and they don’t diversify the district. New Jersey is one of the most racist states in the country.”

As the biggest city in the state, Newark stands at the center of Essex redistricting, and currently claims pieces of three senate districts, including the bulk of the 28th and 29th.

The chief political acolyte of North Ward Democratic leader Steve Adubato, Sr., and chair of the Senate Education Committee who just last week stood beside Gov. Chris Christie as he railed against the Obama administration, state Sen. M. Teresa Ruiz (D-Newark) of the 29th District hopes to harness organizational support to walk back into office for a second term.

One recurring prospective map drawn in her favor would retain the North and East and 30 of 35 Central Ward districts, chop out the African-American-dominant South Ward and send the rest of the 29th north to incorporate the towns of Bloomfield and Belleville, which currently reside in Rice’s 28th District. One consequential alternative for the 28th would deprive it of Bloomfield and Belleville and expand its South Ward presence from half to all the voting districts.

Sources spotted Adubato at last Thursday night’s fundraiser for South Ward Councilman Ras Baraka, who not only defeated Booker’s candidate in May but in the process flexed his own potential to be a South Ward power broker.

If the 29th augments its identity as a Latino-dominant district, and the 28th by acquiring the South strengthens its African-American identification, Adubato may be probing the likes of South Ward stalwarts Baraka, Assemblywoman L. Grace Spencer (D-Newark), Council President Donald Payne, Jr., and School Board Chief Shavar Jeffries as potential opposition to the West Ward-based Rice.

Sources say none of those African-American names would oppose the senator, however, which increases the likelihood of moving Rice westward into the suburbs. If Adubato and other powerful forces truly want to defeat their longtime nemesis, they may have to send him west on the heels of Codey – if not straight into his path for the ultimate gladiatorial showdown between two Democratic Party rebels.

That begs another map, one that would preserve the 29th the way it is now – maybe with a few minor modifcations, including absorption of Belleville, while sending the 28th into west Essex. If Codey is too far west now in his Roseland digs to avoid falling into a Morris County district, Rice could find himself campaigning in a district that includes West Orange and potentially up against someone like Assemblyman John McKeon (D-West Orange), who – in fullblown self-preservation mode – has positioned himself as Assembly Speaker Sheila Oliver’s (D-East Orange) public apologist number one.

Rice said if they do that, fine; he’ll win.

“They’re not going to defeat me in the City of Newark, and they’re not going to defeat me in Essex County,” Rice said. “These guys are angry about the politics. In the end, I’m not worried about it. There are different kinds of power out here. There’s political power and then you have the higher power, which is up above – and we always run our campaigns based on the higher power and our record of accomplishment. They can put me in the west or they can put me in the east, and that’s fine. I’ll be out there swinging a baseball bat in all directions with the higher power.

“I don’t like one or two people making decisions on my life,” the senator added. “We will fight back on objectivity and fairness. I’ll take on anyone who comes against me.”

If he’s too tough for the establishment, as he has been in the past, and Essex Democrats must lose a seat, other opponents and configurations may prove more functional. 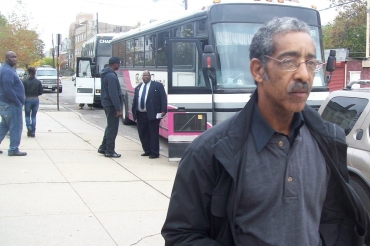