“I see him standing for a different framework from the Founding Fathers and from the previous presidents we’ve seen, both Democrats and Republicans,” Garrett told PolitickerNJ.com. “The way he attacked investors and creditors big and small, essentially with the argument that they’re wrong and government was right, you saw a pushback to that.”

“There’s enough grist in the mill in terms of dealing with these bills (not to go there), but the Pelosi legislation we’re being forced to deal with suggests it,” said Garrett, a day after the North New Jersey Tea Party Group blasted out an email accusing U.S. Rep. Bill Pascrell of lying about his association with Socialist Party members.

“You’re saying I’m a socialist?” a bemused Garrett later asked PolitickerNJ.com, shaking his head and laughing when told about the Tea Party’s suggestion that because Pascrell knows self-professed Socialist (and former Congressman) Bernie Sanders, that he’s fudging the truth when he says publicly that he doesn’t associate with reds.

Now a U.S. Senator, Sanders served out the final years in the U.S. House of Represenatives in the early part of the millenium, and was presumably present for floor votes with both Pascrell and Garrett as part of the same governing body.

Laid back personally, the mountain man ideological firebrand Garrett always wins all four of those county portions that comprise the 5th. His weakest area of the four (Bergen, Waren, Sussex, Passaic) counties – is Bergen, home to 240,000 of the district’s 400,000 registered voters. But the congressman, generally viewed as the most conservative member of the New Jersey delegation, still wins here.

Working his own ranges and with an eye on Anna Little in the 6th District in particular, and Jon Runyan in the 3rd, he feels politically strong, and sees no contradiction in campaigning with Donovan, a pro-choice candidate running against County Executive Dennis McNerney, the graying remnant figure head of the Joe Ferriero Democratic Party era.

“It’s my asumption that Kathe would improve efficiencies and eliminate duplication of services where they exist,” said Garrett, when asked if he finds county government to be a redundant concept and the notion of a “county executive” misguided on its face.

“We’re all part of the Republican Party,” offered Donovan, rounding another stretch of sidewalk and entering a crowded lunch spot at Garrett’s side.

“We’re interested in less intrusive government and more fiscal responsibility, and we differ on social issues,” she added.

It’s not like they haven’t been here before. They campaigned together two years ago, when Donovan survived the Obama tide up here and Garrett defeated blind rabbi Dennis Shulman, 56-42%.

A week ago, U.S. Sen. Frank Lautenberg (D-Cliffside Park) campaigned in Garrett country as he implored Congress to approve a bill that would chip $268 million toward restoration of New Jersey teachers’ jobs. Distrustful of a one-shot gimmick – as was Gov. Chris Christie -Garrett voted against the bill, which passed overwhelmingly with Democratic Party support.

After the vote, Christie reveresed an earlier declaration that he wouldn’t apply for the federal funds, and Garrett said, “If that money is just going to go to other states, Chris’s right (to apply for the teacher funding).”

Trying to bait the hard-right Garrett with a press conference in the 5th District on education in the middle of the county executive contest with McNerney in view of the camers, Lautenberg’s press conference amounted to desperation symbolism, according to Donovan and Garrett.

“It’s a different climate that we’re in now,” Garrett said. “The public is more engaged now than we’ve ever seen before.

“And we’re going to be very successful in Bergen County,” he added, crossing East Ridgewood Avenue with Donovan. 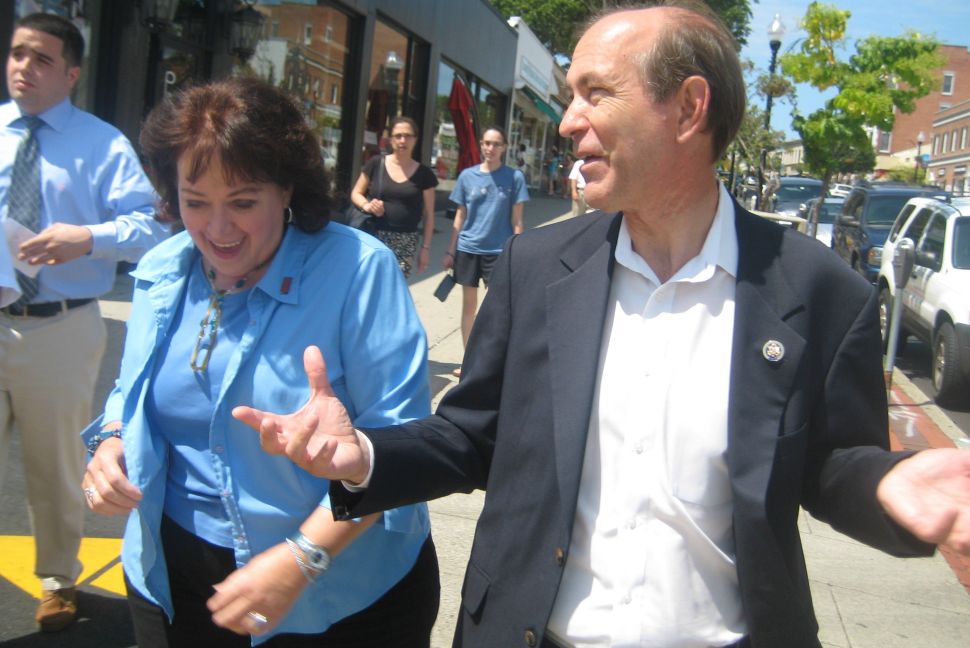