WOODLAND PARK – At a screening of prospective Democratic Party candidates for county sheriff tonight, state Sen. John Girgenti (D-Hawthorne) was a no-show for his penciled-in 7:45 p.m. time slot, leaving at least three other men to eagerly audition for the job in person, as Girgenti made a play to county committee members with a late evening phone call.

“They felt me,” said Goow upon exiting the screening room. “They need a go-getter and a big name. I’m hungry. Paterson has had some low turnouts in the last couple of elections. When I run, I will run hard. Not only will I work the streets, but in two days, I’ll raise $150,000.”

A beaming Spagnola on exiting HQ simply said, “They’re all good people in there,” while Berdnik, the Clifton cop whose name has received the most under-the-radar whispers as the party fave with leadership, said later, “There is a process that has to be followed and I am honored to be part of that process. I am interested in being the sheriff of Passaic County. My hat is in the ring.”

Although not present to screen, Bergen County Police Chief Mickey Bradley of Wayne and Undersheriff Ed Dombrowski are also said to still be in the hunt, according to Democratic Party sources.

But Girgenti’s physical absence was the news – at least to one Democrat whose head appeared outside the front door of party HQ at ten to 8.

She was looking for Girgenti, the three-decade veteran of the state senate whom many in the party believed would emerge as the natural successor to Speziale by virtue of his name ID and status as chair of the Senate Law and Public Safety Committee.

In addition to his political background in a short runway election, party sources argue that Girgenti occupies a less than secure position right now as a top of the ticket prospect in 2011 with redistricting less than a year away and the new mayor of Paterson – the 35th District’s largest municipality – refusing to take his phone calls. Running for sheriff would not only save Democrats the hazards of recruiting and running a potentially lesser known quantity a year after the GOP swept the Dems’ freeholder slate, but, sources argue, save Girgenti and boost his pension.

Sources say the senator did eventually make a phone call to HQ tonight, and was broadcast to committee members via speaker phone. He made a pitch, steaming those committee members who had thought his early reluctance and no-show had meant the committee could move on to consider the other candidates.

Hours before the screening, Girgenti sat down with Party Chairman John Currie, 20-year steward of the party and one of a dwindling handful of strong Democratic Party chairmen.

Stunned when Speziale ripcorded his sheriff’s job for a post at Port Authority without telling Currie he was leaving, Currie initially turned to Girgenti as the most obvious option. But he didn’t get a charged-up response from the vacationing senator and that worried him.

Days later, after initially telling party leaders last Thursday that he was committed to running for the state senate again, Girgenti said he was probing a sheriff’s run, according to sources. But absent that first fiery show of interest on Girgenti’s part, Currie and U.S. Rep. Bill Pascrell (D-Paterson) began leaning toward Berdnik.

A cop. A registered Democrat since 2005. Good reputation.

Trying to show resolve where Girgenti was wobbling, the chairman today essentially told the senator during their sitdown that he had decided to “head in another direction,” and the men parted with Girgenti saying he wanted to do it – but his desire to screen before the county committee still a question mark and Currie hard-nosed, sources said.

“I don’t know” one county committee member mouthed to PolitickerNJ.com from across the room to a question about whether Girgenti would appear, just before the party chairman eradicated reporters from the building.

Goow arrived energized with the prospect of making his case to the committee: special police officer in Haledon and licensed private investigator – but more importantly, the highest vote-getter in Paterson ward races and a proven fire-in-the-belly campaigner.

“Why can’t it be me?” asked Goow, standing on the pavement outide party HQ where a campaign sign contains the names of Pascrell and the two freeholder candidates and the word “for sheriff” under a blank space.

But the word out of party HQ late was that leadership’s intent to back Berdnik and get it done in time for a ratification at next Thursday’s county committee meeting, took a hit with the unexpected phone call from Girgenti, whose sudden persistance threatens a split.

Livid over the Girgenti conference call, Currie was doggedly dug in on Berdnik, however, two party sources said at the end of the night – and after the freeholder sweep last year and the Speziale shocker, the veteran chairman was intent on proving his toughness. 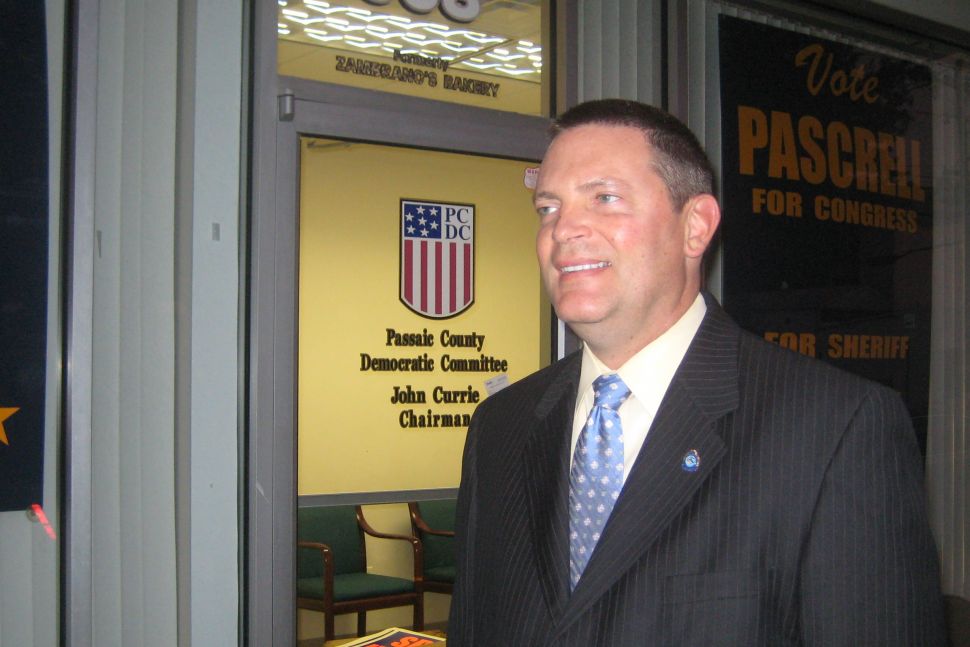