A year after Gov. Chris Christie opened a campaign headquarters in Newark and pledged to work for the cities, Republican congressional candidate Dale Glading is attempting a similar arm reach around First Congressional District urban voters in the midst of Camden’s struggles – and at the expense of 1st District incumbent U.S. Rep. Rob Andrews (D-Haddon Heights).

“For too long, Rob Andrews and his fellow Democrats have sat comfortably in their suburban homes and paid lip service to the residents of Camden,” said Glading, a prison minister headquartered in Moorestown. “They poke their heads into the city around election time and then don’t reappear until the next election cycle.

“It’s time that Rob Andrews and the South Jersey Democrat Machine stopped taking the people of Camden for granted,” added Glading, who’s challenging Andrews for the second time. “Investments along the waterfront and at Cooper Hospital may make for good photo ops, but that’s not where the people of Camden live.”

The appeal comes two years after Andrews blew out Glading, 72-26%, and as Camden copes with a loss in $8 million in state aid as a consequence of Christie’s budget cuts, on top of its existing status as one of the country’s poorest cities.

“Rob has worked day in and day out with citizens and elected officials for Camden’s safety and prosperity,” Tagmire said. “For example, in recent years he has delivered over $14.5 million in police funds, allowing the city to add over 140 officers to its force, and over $2 million in firefighter aid making it possible to purchase a new ladder truck and modern equipment. This joint effort by residents and law enforcement professionals has helped to reduce violent crime by nearly 10% since 2008.

“This same team effort has yielded many investments in economic development, including several thousand new homes at major communities run by the Camden Housing Authority, a $28 million superfund cleanup project at a condemned factory, $38 million PATCO modernization effort, $2.25 million for health center improvements, and other projects under the Recovery Act. Rob is honored to work for and with the people of Camden to revitalize the city,” added the campaign manager. 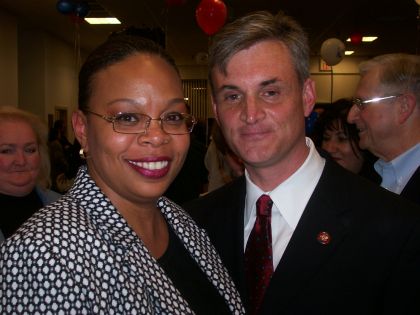