A state ethics complaint filed this month claims that in his first meeting on the governing body, Bergen County Freeholder Rob Hermansen approved Wachovia Bank, a subsidiary of his employer Wells Fargo, as the depository for Bergen County funds.

A source on the Freeholder board said the ethical issue was discussed in closed session at a recent meeting, so Hermansen, a Republican, had knowledge that the vote – which took place at the board’s reorganization meeting in January – was in question.

Nor did Etler discuss any closed session business with the board.

Etler was not present at the January meeting where the vote took place, so how did he know about the possible violation in the first place?

“I’ve got sources on the inside,” the retired politician said. “I ask some of the freeholders and they let me know. I’m still politically connected.”

Does Hermansen get a pass on his first vote? Maybe he didn’t understand the process?

“He gets a learning curve?” Etler pounced. “He knew that he did it. These guys are the first to point fingers. It’s a clear violation.”

One Republican source alleged that at least one member of the freeholder board’s Democratic majority was using the issue to leverage Hermansen’s employer, applying pressure for him to either resign his elected office or quit his job.

Another GOP source said Freeholder Chairman Jim Carroll may have a similar issue, in Carroll’s case pertaining to his former employer Verizon and other county business.

“I totally divested myself from their pension,” the retired Carroll told PolitickerNJ, eliminating any connections with his former bosses.

The ethics complaint isn’t based on any private information; Hermansen’s employer and his vote in January are both public knowledge.

But what freeholder pushed this issue onto a retired pol in Fair Lawn is still unclear.

Although they both spent time as mayor of Fair Lawn, one source said it is unlikely that Etler heard the news from Freeholder David Ganz. The two are not all that friendly, the source said.

Freeholder counsel Ed Florio said he was unfamiliar with the complaint and therefore could not comment. 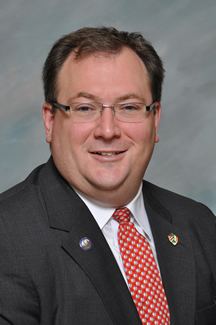