Here’s the deal: Remember how Snooki, drunk or sober, was never seen without that Coach bag dangling from the crook of her arm? Snooki and her Coach were as synonymous as The Situation and his six-pack. But then the winds of change started blowing on Jersey Shore. Every photograph of Guido-huntin’ Snooki showed her toting a new designer purse. Why the sudden disloyalty? Was she trading up? Was she vomiting into her purses and then randomly replacing them? The answer is much more intriguing.

Allegedly, the anxious folks at these various luxury houses are all aggressively gifting our gal Snookums with free bags. No surprise, right? But here’s the shocker: They are not sending her their own bags. They are sending her each other’s bags! Competitors‘ bags! Call it what you will — “preemptive product placement”? “unbranding”? — either way, it’s brilliant, and it makes total sense. As much as one might adore Miss Snickerdoodle, her ability to inspire dress-alikes among her fans is questionable. The bottom line? Nobody in fashion wants to co-brand with Snooki.

As the Snookstress odyssey continues, it will be interesting to watch her bag evolution. Will Gucci send her a truckload of Goyard? Will Goyard then deluge her with Valextra? (If Snookie starts carrying a Valextra bag, it is inevitable that she will malaprop the name into “Valtrex,” the herpes medication. This will doubtless accelerate the inevitable preemptive strike by Casa Valextra.)

Soon she will be able buy her own Birkin, thereby precipitating a mass Jonestown suicide over at Maison Hermes.

Snooki’s meteoric and lucrative ascent means that she will soon be able to sidestep the whole issue and buy her own Birkin, thereby precipitating a mass Jonestown suicide over at Maison Hermes. (Warning! “Hermes” can easily be Snooki-spoke into “Herpes.) Or will they just go to the next level and send her a super-exclusive Belgian Delvaux bag? (Launching in the U.S. at Barneys this fall, Delvaux Since 1829 is arguably the most elitist brand in the world.)

I feel a certain solidarity with Snooki, and not just because we are both 4 feet 9 inches tall: I too have been a pawn/victim of preemptive product placement, or PEPP. Let me explain: For a number of years now, I have been a loyal devotee of the Gucci shoe. They are comfy and classy, and the commitment to prominent logo placement appeals to my unapologetic nouveau riche sensibility.

Wherever possible, I purchase these sneakers and slip-ons at Barneys, enjoying as I do after 25 years of loyal service an anesthetizing discount. However, being small of foot, I am often forced to patronize a Gucci flagship in order to acquire the requisite size. Earlier this year, following a series of full-retail purchases at the Fifth Avenue store, I took it into my head to request, by repeated email, a “press discount.” These attempts have been totally unsuccessful: No discount has been forthcoming. When Snooki PEPP rumors began to fly, it suddenly occurred to me that I was in the same boat as the reality mega-star: The Gucci folks would clearly prefer to discourage my loyalty rather than foster it. Snooki and I are the Typhoid Marys of the luxury branding world.

Oh! There’s the doorbell! Must dash! It’s probably a Fed Ex package of Crocs-anonymously sent by Gucci — in a desperate attempt to release my corrosive death grip on their sacred image. 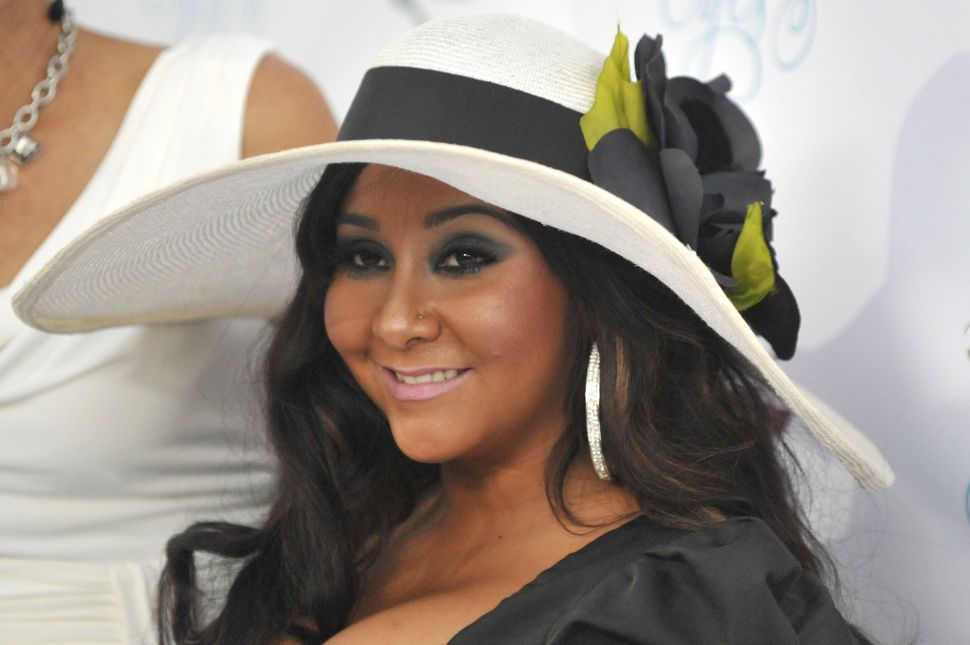