Paterson Mayor Jeff Jones doesn’t blame departed Sheriff Jerry Speziale for exiting suddenly in the build-up to the general election. But Jones, who in May won a stunner against incumbent Jose “Joey” Torres, said he would like to help the party select Speziale’s successor.

“I have not received a phone call and to this point Paterson has not been part of the process,” Jones told PolitickerNJ.com. “It’s important that we be a part of the process, as we are Passaic County’s biggest city. I would like to be invited to have some kind of conversation about who the next sheriff should be.”

The mayor denied that he has a candidate in the race.

“Somebody competent,” he said when asked for a name. “Somebody who understands sheriffing, and who can partner with our communities.”

Jones refused to criticize both Speziale (for leaving the contest) and Passaic County Democratic Committee Chairman John Currie (for apparently getting blindsided by Speziale’s exit).

But the mayor did note the hazards of having a $1 million dollar candidate with ten years of name ID traction suddenly disappearing.

“It doesn’t say anything abvout the party,” said Jones. “This is about individuals taking care of their own families and their own unique needs. This is not a condemnation of whether the party is strong or weak, but recognizing that individuals come together to form a party and can also leave to attend again to their indivudal needs, it’s perhaps an example of what can happen when you put all your eggs in one basket.”

One name circulating today is that of Passaic County Sheriff’s Chief Leonard Lovely.

“At this time I have not spoken with the chairman,” Lovely told PolitickerNJ.com. “However, whoever his choice is will get the support of myself and this department.” 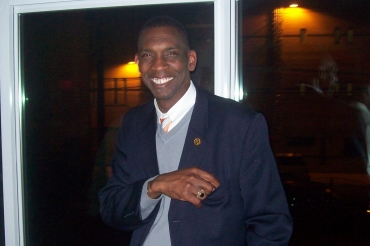