New Jersey is not among the winners of the federal Race to the Top competition that would have provided some $400 million in funding to New Jersey schools.

The winners, announced by the U.S. Department of Education Tuesday morning, include The District of Columbia, Florida, Georgia, Hawaii, Maryland, Massachusetts, New York, North Carolina, Ohio, and Rhode Island, which will all receive a chunk of the $3.4 billion pot.

The state teachers union, which had battled with Christie over the application and refused to sign off on the final product, blamed the governor yesterday for losing out on the money.

“New Jersey’s failure to win Race to the Top funding is a direct result of Gov. Christie’s misguided decision to hijack the grant application process for his own political purposes,” said NJEA President Barbara Keshishian in a statement. “His decision to reject the collaboration required by the US Department of Education cost New Jersey a chance at $400 million.”

“He made it clear in June that he was not interested in the input of professional educators in the application process, and he insisted that he knew best what it takes to win this grant.  He now owes the people of New Jersey an explanation for why his application failed.  And he owes students and taxpayers an apology for undermining a process that could have brought much-needed resources and genuine reform to our state’s public schools.”

The decision by the feds will no doubt fuel the already blazing feud between the governor and the NJEA.  The two have been at war over Christie’s education agenda and the Race to the Top application provided one of the many moments of rancor between the two.

Earlier this year, the NJEA and Education Commissioner Bret Schundler huddled on an application that was evenutally nixed by Christie, who scolded Schundler for dealmaking and submitted his own application for the grant money.  The two sides traded barbs over the application, which included a proposal for merit-based-pay for teachers, a stance the union vehemently opposes.

When New Jersey was named a finalist last month,  the Christie administration crowed that it had happened in spite of the NJEA and not because of it.

“So long as NJEA stands opposite a bipartisan, nationwide movement – championed, no less, by a Democratic President – to bring real education reform, the further out of touch with the mainstream they will have exposed themselves to be,” spokesman Kevin Roberts said at the time.

Tuesday, Christie distanced himself from the setback, offering no comment and instead allowing Schundler, who had earlier run afoul of the governor over the process, to comment instead.

“This process has allowed us to move quickly and vigorously to craft much-needed education reforms, while securing the unanimous, bipartisan support of the legislature for the plan embodied in our Race to the Top application,” Schundler said.  “This fall we must act swiftly to implement the education reforms the people of New Jersey deserve and demand to transform schools in our state that are failing, improve the quality of education for every New Jersey child and challenge the status quo wherever it is necessary.”

The NJEA has been severely weakened during the power struggle with the freshman governor as the union was unable to stop Christie from making massive cuts to school aid as part of his first budget as the state’s chief executive.  The union’s power was further curtailed when 58 percent of the state’s school budgets failed last May after Christie urged residents to oppose the plans in districts where teachers refused to accept a one-year pay freeze.

A loss here would have struck a further blow to the power of the union that once was able to dictate to state officials.

The next test for the teachers could come in November when State Sen. Tom Goodwin (R-Hamilton) comes up for his relection bid against Assemblywoman Linda Greenstein, (D-Plansboro) in the public-employee heavy 14th District.  Goodwin was a strong proponent of Christie’s plan for a 2.5 percent constitutionally mandated property tax increase cap, which promises to take a toll on local school districts. 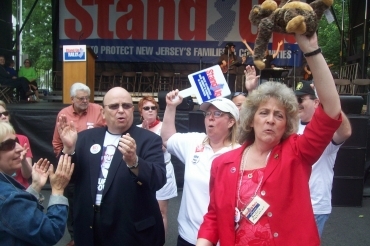