WEST ORANGE – Stopped by North and South Democratic Party organizations, former state Senate President Richard Codey (D-Roseland) tonight commiserated with Chuck Wepner of Bayonne, who once stretched Mohammed Ali into the 15th round before succumbing, and Gerry Cooney of Fanwood, who took Larry Holmes to the 13th before a referee waved it off over Cooney’s protests.

“I remember it like it was yesterday,” Cooney said.

Wepner had a few fights after Ali – including one significant minor title bout – but never fought for the crown again.

“I told my wife the morning of the fight, ‘Baby, tonight, you’re going to be sleeping with the heavyweight champion of the world,” recalled Wepner of his notorious 1975 showdown with “The Greatest.”

When he lost, his wife asked him, “Is Ali going to come here or do I have to go to him?”

For his part, after losing to Holmes, Cooney later served as second round knockout fodder for a come-backing George Foreman.

That leaves Codey, the former governor of New Jersey and Essex County political animal, floored by the Democratic Party last year after a senate leadership fight, who now quietly tries to regenerate and work his way back into contender status, if not as a statewide candidate himself, as a political godfather and cultivator of young talent, according to sources close to him.

Already owner of the richest warchest among senators one year ahead of re-election and bruised by the organizational nexus of South Jersey Democrats and Essex County Executive Joe DiVincenzo, Codey tonight at his Essex County Country Club fundraiser added $161,000 to the $1.2 million he already has in the bank.

“My goal is to raise $2 million by 2011,” said the senator, whose political enemies regularly muse on a redistricted map next year that banishes to Codey a Morris County-dominant legislative district where they’re certain he’ll lose.

“We will have $2 million on-hand and that won’t include my running mates,” he promised PolitickerNJ.com.

While they like his re-election chances on this map or the next, Codey’s allies think talk of an impending matchup between Codey and state Sen. Joe Pennacchio (R-Montville) on Pennacchio’s GOP turf is a canard.

“Redistricting has a domino effect. How can Republicans take a safe district like the one occupied by Joe Pennacchio, and make it competitive against Codey and $2 million by putting Roseland in there?” asked Codey chief John Boguchwal. “By the same token, why do Democrats want to take a safe district and put it at risk just to get rid of Codey? By the time you’re going after this guy or that guy, you impact the map and jeopardize the party’s chance to win. Why go after a seat to lose a seat?”

Posing for pictures with Wepner and Cooney, a grinning Codey said, “I’ll take whatever comes. I have no hard feelings.”

Against a looming political warzone in Essex next year, he has some momentary reason to smile. After his own party ousted him from the Senate Presidency in 2009 and he failed to muster support for a retaliation against DiVincenzo, Codey quickly plotted to regain his footing – and did.

Standing with his wife Linda near Codey, Wepner back in the day said he fought 27 training rounds with Joe Frazier and could never get off a right hand because every time he threw one, Frazier would land a left hook to the body.

“All I could do is jab,” said Wepner.

Golf and basketball are Codey’s sports, more than boxing.

“But you had to know how to fight, growing up in Orange,” he told Cooney.

Following his loss for the leadership seat, an otherwise neutralized Codey piled up several jabs in 2010. He played defense in his 27th District: working to secure the election of Mayor Rob Parisi in West Orange. He successfully championed Bayonne Mayor Mark Smith for the chairmanship of the Hudson County Democratic Organization; and supported the long-shot Newark Council candidacy of Darrin Sharif.

“The winner gets a gift certificate to the Xanadu mall,” cracked Codey at the front of the big banquet room as he called off the results of the raffle.

But even as the governor burnished a few victories that kept his career off the cold slab, and projected local confidence in the face of next year’s endgame, news of state Sen. John Girgenti’s (D-Hawthorne) private agony circulated among the ex-guv’s guests hovering over the deep dish entrees.

The going question was whether Girgenti, a three-decade fixture in the state Senate who started out as a member of the same Young Democrats organization to which Codey belonged, should run for the vacant Passaic County sheriff’s seat rather than risk a potential redistricting crunch and Democratic Party civil war threatening to ignite in the 35th District.

As a longtime, aging ally of Codey’s, Girgenti’s survival tactics may mirror to some degree the fight Codey faces, and is in fact just another battlefront in the same theater of war. The senator wouldn’t offer his insight into what move he believes Girgenti should make: run for sheriff, take his chances running again for senate, or retiring.

Nor would he speculate on his own plans: run for senate again in a tough or easy district, fade into the role of elder political operative with a sack of fun money for the future campaigns of those young allies in the room – or run for governor.

He considered the last of these.

“You and I have no idea where Chris (Christie) will be at that time and place and where things will stand politically,” Codey said. “He’s enjoying it, and that’s great, but after a while it catches up to you. He’s doing a masterful job politically at creating boogiemen for himself. He shoots from the hip a lot, but the danger with that is that at some point, he may end up using a weapon he doesn’t want to use.”

At the wind-up, Cooney told Codey, “I love you. You’re a great man,” and headed for the exit with the other guests, among them Wepner, whose last fight was a decision loss in Totowa when he tried to regain the heavyweight championship of New Jersey. 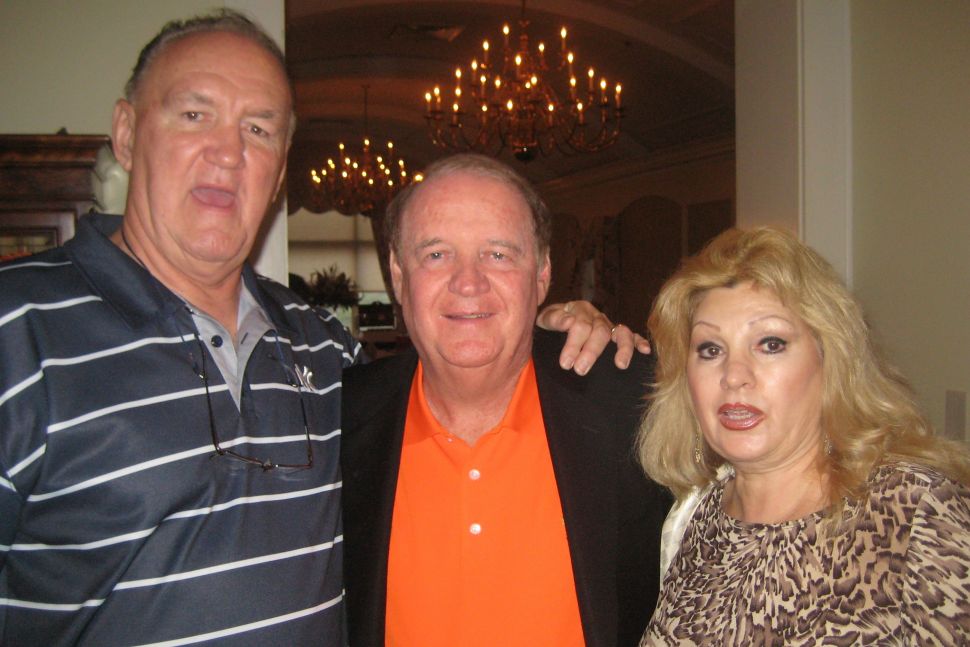