PAULSBORO – Down in this grimy port, south of Camden and lined with oil company industrial parks, Gov. Chris Christie was stroking one spoke on a two-pronged axis of crossover power, the bipartisan largesse that keeps the governor afloat with a Democrat-controlled legislature.

Sweeney has been glued to the governor since Christie returned from his vacation last week, and the two ringleaders have been sketching a public perception of competitive cooperation.

“Developing New Jersey’s renewable energy resources and industry is critical to our state’s manufacturing and technology future,” the governor said.

Kevin Roberts, a Christie spokesman, said the governor isn’t doing anything out of the ordinary by attending several recent events with Sweeney; the sponsors are generally invited to the bill signings.

Speaking this morning at the event about the Hanson Report and solutions for Atlantic City, Sweeney, in a role-reversal moment, championed private sector relief that he juxtaposed with the Christie administration’s tentative plan to take governmental control of a tourist district. Sweeney repeated a quote to a reporter, “The government can’t run a car wash,” he said, continuing with his point, “Look at Camden, look at Paterson, Look at Jersey City.”

At best, his arguments moved Christie to his left; at worst, Sweeney appeared to be making a case for GOP policy.

Last September, then-Gov. John Corzine stopped in to witness groundbreaking of the port, and courted some southern hospitiality. Was Christie doing the same?

Before the question of whether today’s press conference was some glad-handing from Trenton came up, Burzichelli cut it off at the path.

“This project is a decade in the making,” he said. Environmental cleanups on the brownfield site took some time to prepare, plus the economy tanked.

Burzichelli wouldn’t even nibble on what the political signals being flashed were. Why Paulsboro for a wind energy bill? Why in the blue south with Philadelphia in the backdrop? Christie said the town could take the lead in creation and shipment of turbines for the offshore wind farms.

And while that may be the case, this powerful governor still needs the legislature to continue governing with the panache and power he has shown so far. For Christie, it starts – in part – in the south. 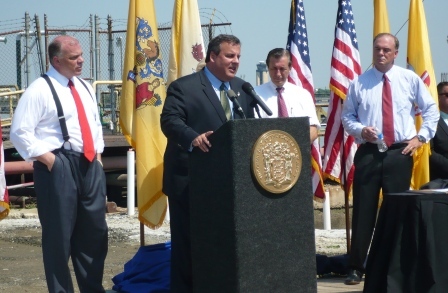