Bergen County Executive Dennis McNerney is dealing with some major issues, including an investigation into the county’s financing arm, the Bergen County Improvement Authority.

But on Friday, his political opponent, County Clerk Kathe Donovan, fired off a letter to McNerney’s BA Timothy Dacey accusing the county of hiring “politically motivated (certainly not independent)” auditors who pushed Donovan into a corner in an election year by “cramming three annual audits into one year.”

“It is no coincidence that your boss, the sitting County Executive, and I am running for the same office,” Donovan wrote. “The manner in which you have attempted to raise and color the audit issue at the same time your office delayed completion of the required annual audits is irresponsible and reflects the worst in partisan politics.”

Brian Hague, chief of staff to McNerney, told PolitickerNJ today, “It’s been noted that she’s had problems with different audits in different year.”

“They have a meeting today at 3 o’clock. It must be resolved today,” Hague said.
Donovan insisted on the conference in her letter to “correct the inaccurate and false comments” in the report. She’s yet to give her sign off on the audits.

“(Y)ou and some of your Freeholders, evidently, working in concert with the Democratic handpicked County Auditor have chosen to irresponsibly and personally attack me at a recent Freeholder’s meeting for allegedly not cooperating in the truncated audit process,” she wrote. “These orchestrated attacks came at a time that you and your colleagues have failed to address serious questions regarding possible fiscal impropriety at the BCIA.”

Hague said Donovan made this issue political, and said the county is “ashamed on her behalf.”

But BCIA aside, the county auditor, Steve Wielkotz of the firm Ferraioli, Wielkotz, Cerullo & Cuva of Pompton Lakes, has been a prolific political contributor throughout the years. He’s pumped over $50,000 into the Bergen County Democratic Organization alone over the last decade. 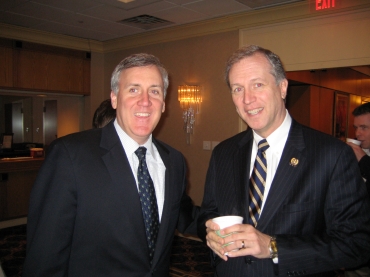