His political ascension was rank with fortuitous timing – one local Democrat called him “the luckiest man in Hudson County.”

Sires conceded somewhat – “There’s always an element of luck and timing” – then he questioned whether the source was just a local pol jealous of his rise to power.

His unexpected appointment as Speaker of the Assembly was a compromise in a heated north-south battle in 2002, following the election of ex-Gov. Jim McGreevey. Then he took U.S. Senator Bob Menendez’ spot in Congress when then-Sen. Jon Corzine’s took off to become the governor.

“I happened to be in the right place at the right time,” he said, “but I also have the record to run on.”

His backyard was decimated last year by the Bid Rig arrests. “Anytime your hometown gets bad press, you get embarrassed,” he admits. He said the northern Dems have a deep bench and will find a way to recoup. “You always want to keep an eye on your base.”

Facing a challenge from the GOP’s sacrificial lamb, Henrietta Dwyer, Sires does not seem daunted. “In this area, people are great,” he said, and because it is so Dem-heavy, he doesn’t have to convince two sides that he has the right answer. “It gives me the flexibility to represent what people want.”

Nationally, taxpayer groups hammer his positions and labor loves him. But red issues do not reign in hardcore blue country.

But he does address the issues, whatever they are, including the overseas battles he was a party to in Congress. “Some of the votes on the war,” he said solemnly, “I’m not voting for any more money for the war.”

Sires said $3 billion “flew out of Afghanistan” and the government found a $48 billion surplus from funds they sent to Iraq. “Don’t count on my vote again,” he told the majority leader.

“We started out with weapons of mass destruction and nation building,” he said. “Now its down to containment…This is just bleeding the country,” Sires said. “They’re coming back maimed.”

These people put their lives on the line for us,” he said, noting that he visits Walter Reed Army Medical Center from time to time with the Hispanic Caucus.

Sires, 59, was an unsuccessful Republican early in his political career then switched sides and became mayor of West New York. He has a strong record on left-leaning social issues; how did survive in the Republican Party?

He butted heads, he said, but kept good relations that paid off when he became the Speaker. “I left (the Assembly) on very good terms,” he said. “I earned my stripes.”

He regrets his affirmation of the cap-and-trade program. Intended to regulate emissions, the stalled program is being used in campaigns across the country to paint its backers as job-killers. And he was particularly proud of his votes on health care and financial reform, for what they were worth.

Standing by his party, Sires said Troubled Asset Relief Program (TARP) monies were doled out to keep the financial institutions afloat – a government bailout of irresponsible Wall Street-types, according to critics. He believes it will prove successful. “I think history will bear out that we took the right vote.”

He said the health care donnybrook was wearisome, but fruitful, especially representing an area that relies heavily on government health subsidies. “It was one of the most difficult times I’ve (had) in politics,” he said, made more difficult because of the losing fight for a public option.

He’s working with Gov. Chris Christie on a monumental project that will raise the Bayonne Bridge by 65 feet to fit supertankers underneath. He said 250,000 jobs are at stake if the state doesn’t adjust to the new transport sizes, a la the Panama Canal.

On President Barack Obama’s administarion, Sires said, “I think they lacked a little bit of experience, but they’re getting their act together now. He inherited… I mean, my God, there was nothing that worked when he took office.” 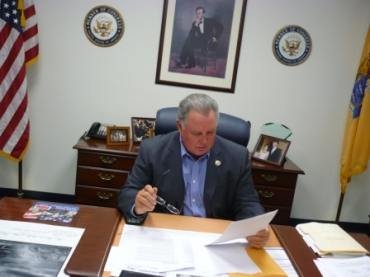