No one looks confident in Ridgefield, population 10,000 and change.

No one knows what the outcome will be, but possibly by the end of the night and definitely by the end of the week, Ridgefield will have a mayor who has the confidence of a majority of the voters, and maybe not one who’s awaiting a federal corruption trial.

“It’s almost right down the middle,” said Councilman Angelo Severino. “You get diehards on both sides.”

An attorney in Fort Lee by day, Suarez was on the streets of Ridgefield this morning, organizing supporters and shying away from the press.

He declined comment as he left the Ridgefield Public Library for some good ol’ GOTV.

Elected in 2003 and re-elected in 2007, the mayor maintains that he deserves his day in court before the voters decide if he is capable of continuing to run the borough. His next court appearance on the corruption charge is in September. But Severino said the corruption collar already has the town on a leash, epitomized by a development freeze enacted by the state.

“It’s a shame that it’s come to this,” Severino told PolitickerNJ.com. “When he’s representing the whole community and he’s taking bribes, it’s not acceptable. I would sincerely hope the voters would see it that way.”

Both sides – pro Suarez and con – have their fodder and are using it. An old man hassled Ridgefield Republican Chairman Bob Avery outside the library for the taxpayer cost of a recall election, $25,000, according to a statement from the mayor.

The strategy for Camp Suarez is obviously to vote ‘no’ in column A, but also to vote for Councilman Javier Acosta, a Democratic ally of Suarez, in column B. Albert Gil is the independent/rogue Democrat who most say has the weakest base.

The third alternative to Suarez is Warren Vincentz, a retired engineer and a Republican.

Pushing Vincentz, Severino ticks off Suarez’ failures: including stalled or failed development and a large tax hike two years into his seven years in office.

Will the issues play a roll in this referendum? Maybe not, Severino admits; most of it is old news. Now the focus is on the potentially criminal conundrum that is holding back the city, critics say.

Poll workers said turnout thus far is close to a municipal election, like the one coming up in November where Severino will vie for his seat on the Borough Council. One other seat is also at stake, and if either Acosta or Vincentz take over as mayor, another seat will also be in the mix. 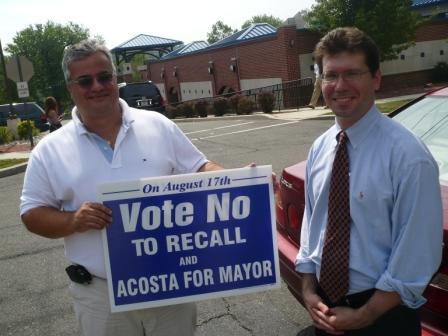