As news that New Jersey lost out on $400 million in federal school aid due to a clerical error began to circulate throughout Trenton, political watchers say the failed application may have exposed the first chink to date in the Christie armor.

“I think it’s really the first public misstep on the part of the administration,” said LaSalle University Provost Joe Marbach.  “The governor tried to shift blame onto the mindless bureaucrats in Washington, but the mindless bureaucrats were just doing their job and they rated the application according to the guidelines they were given.  That sounds kind of hollow.”

Christie has seemed all but invincible to date, as his battles with the unions, the Democratic legislature and anyone else who stands in his way have nearly all ended in victory – or at least a draw – for the freshamn governor.  Democrats have sought, and so far failed, to land a solid punch but as the governor stumbles, the blows may be starting to land.

“I think the Christie Administration has made mistakes before but this is a big one and an expensive one,” said Ben Dworkin, Director of the Rebovich Institute for New Jersey Politics. “This one is different because it’s easy to understand and the cost of losing it is very easy to understand an in that sense it’s more likely to resonate in the public than any other setback cited by Christie’s critics.”

Before news of the application error was broken by the Star Ledger, Christie was poised with his foot on the throat of the once mighty teachers union, a ‘yes’ from the feds the only thing standing between the governor and near-powerless union.

But the error, which Christie explained at a press conference Wednesday amounted to one page out of thousands, breathed new life into the union, which was all but gleeful Tuesday in attacking the governor over the lost money.

“I think the governor couldn’t stand to see that we were doing something worthwhile for the administration and he shut it down,” said New Jersey Education Association Spokeswoman Dawn Hiltner.  “We had the right budget information in our application. To us it signifies that he has to learn that collaboration is a better way to go than confrontation.”

Christie swiped back at the union in his usual pugnacious fashion telling reporters Wednesday that had the union signed off on the application rather than shunning Christie’s reform proposals, the application would have earned more points.

Democratic lawmakers have also seen some daylight in their running feud with the governor over Christie’s recent budget, which cut $1.4 billion in aid to local schools.  Democrats wasted little time in piling on the governor calling the mistake on the Race to the Top Application incompetence and wondering whether it wasn’t the result of poor communication between Christie and his staff.

“It’s astonishing that the administration’s failure to proofread their own homework would lead to losing out on this funding that could have gone such a long way toward improving our educational system,” said Assembly Speaker Sheila Oliver in a release, one of several issued by the party.

At a press conference Wednesday, Christie downplayed the mistake, calling it a “simple clerical error.”  The Governor said he would not fire anyone over the error and shifted much of the blame to Washington, where he said bureaucrats were down there “checking boxes like mindless drones.”

“If you’re a normal, thinking, breathing, human being you pick up the phone,” he said of U.S. Department of Education officials who discovered the gaffe but failed to mention it. “This is the stuff that drives people crazy about government…Does anyone in Washington D.C. have a lick of common sense?”

But Democrats, sensing weakness were loathe to let the governor, who some have called a bully due to his my-way or the highway style, off the hook so easily.

“The Governor’s shifting the blame to President Obama for his own mistake is a stretch of reality that even a second-grader would find amazing,” said Senate Majority Leader Barbara Buono (D-Middlesex). “As a mother, this reminds me of a similar refrain I would occasionally hear from my own children that it ‘wasn’t my fault,’ ‘not me’ or ‘it’s not fair.’”

Others took swipes at the governor as well.

“It’s beyond ludicrous that Gov. Christie is passing the blame for New Jersey taxpayers and children missing out on vital education funding,” said Assemblyman Patrick Diegnan, D-Middlesex), who called for a state attorney general or state comptroller’s investigation  “The buck clearly does not stop at Gov. Christie’s desk.”

Christie called the attacks “partisan claptrap” and called on the critics to get back to Trenton and work on something of substance. 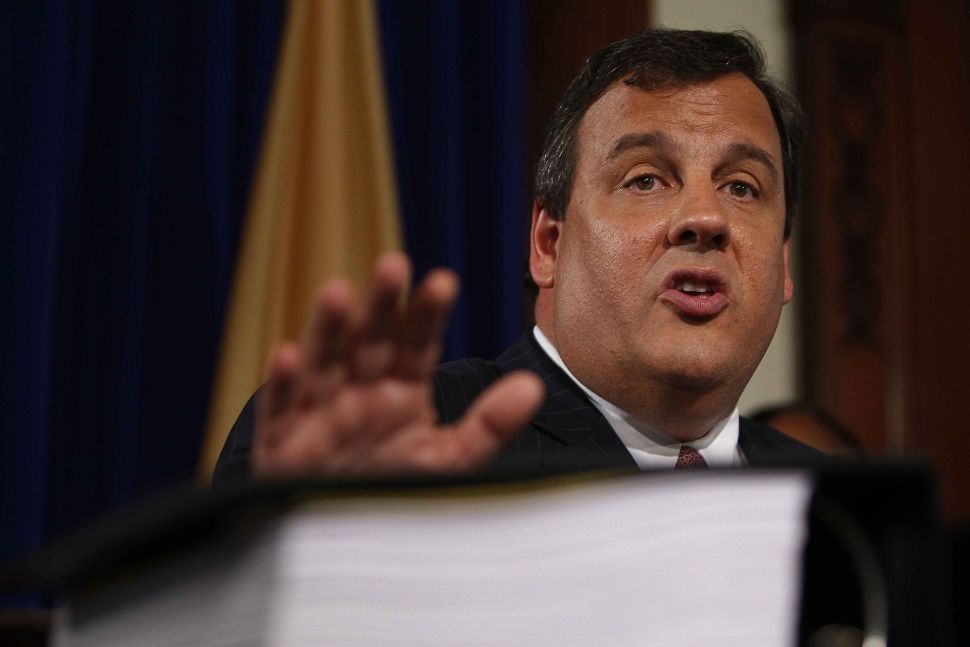