New Jersey redistricts every ten years following the United States Census, according to the state Constitution, and we are due up again next year.

Republicans want a map that gives them the edge on the state’s 40 districts, and Democrats want a map, and those two maps can’t abide in the same political universe, forcing a coming clash as the players fiercely – but quietly – gear up for legislative redistricting.

Beaten at the table ten years ago when Democrats increased their urban representative strength, Republicans this time started organizing early, forming a 501(c)4 with the express purpose of raising money for the fight and bringing in some big consulting guns, notably Ben Ginsberg as chief counsel. Operatives who may at some point officially become commission members sat down with the county Republican chairs.

“We have been focused on this for a long time, it’s an important part of the constitutional process,” said Republican State Party Chairman Jay Webber.

Sources say the GOP argument for more Republican-friendly districts hinges on growth spurts in Monmouth and Ocean counties and contrasting underperformance in urban legislative races. Down 17-23 in the senate right now, and 33-47 in the assembly, their prevailing case might warrant folding Newark-dominant districts 28 and 29 into one another and welding 31 and 33 together while adding seats in Ocean and Monmouth.

Democrats will likely repeat their case for representational fairness, returning to a 2000 core argument to unpack and redistribute urban districts to enable greater minority participation.

“If you start with the existing plan as a base, it’s a fair democratic plan adopted in 2001, which resulted in the 20-20 split in the senate,” said Leon Sokol, who served as Democratic Party counsel for three straight redistricting sessions. “By unpacking supermajority districts, minorities were able to advance candidates of their choice. The existing map is a good starting point and a fair map constitutionally.”

But Republicans feel energized by the Bartlett v. Strickland decision of 2009, in which the United States Supreme Court ruled that a minority group must constitute a numerical majority of the voting age population before being able to invoke Section 2 of the Voting Rights Act.

The GOP says the turnout numbers aren’t there for the Democrats in their safe districts.

“If they hired a lawyer who’s telling them that, they ought to get their money back,” said Democratic State Chairman John Wisniewski. “They’ve been in the minority for ten years. That’s because the demographics of New Jersey favor a Democratic map. If you look at the numbers from the last decade, there are more Democrats now than there were ten years ago.”

But “Our legislative candidates have received more votes in three out of the last four legislative races and yet we have still lost seats,” insisted Assembly Minority Leader Alex DeCroce (R-Parsippany).

Encouraged by the presence of an aggressive governor who wants control of the legislature, the GOP has conducted redistricting meetings going back to Chris Christie’s selection of Webber last year to serve as state party chairman. Playing defense, Democrats under Wisniewski convened one meeting this summer, according to party sources.

“We’re a little early in the game,” said the Democratic Party leader. “We don’t have final census data. We’ll get that next year. The real work has not yet begun. The real work will begin when we get the census data. We do know that the population of New Jersey has increased – not decreased – contrary to what the Christie administration is telling everyone.”

The Secretary of State’s Office gives both sides until Nov. 15th to assemble their five-person teams, at which time she will certify them in preparation for a head-to-head that constitutionally must result in a redistricting plan by March of next year.

Both sides agree that the conflagration of competing interests finally gives the reins of decision to the 11th member, a disinterested party to be appointed to the post by Chief Justice Stuart Rabner.

“The argument goes to convincing a majority of one,” Wisniewski said.

Defining all redistricting conversation among political insiders are equal parts fear and motivation for greater power. Rumors of one town getting yanked out of a given legislative district inevitably boomerangs with the addition of another town to offset the imbalance. The power enhancement of one results in diminishment of power elsewhere.

“We’re always optimistic, but it’s like a domino effect,” admitted Burlington County Republican Committee Chairman Bill Layton. “In a perfect world, I’d like to see Camden come out of the 7th district, but that would impact (Assemblyman) Joe Malone, who’s got the northern part of the county. See? Dominoes.

“A lot of things have to play out,” Layton added. “I can say this with certainty: we (Republicans) learned the lessons of a few years ago and we’re prepared.”

Part of the early intrigue around 2011 redistricting includes the fate of former Gov. Richard Codey – defrocked of his Senate Presidency in 2009 – and state Sen. Ronald Rice (D-Newark), a diehard Codey ally.

At issue is whether the Democratic Party power axis helmed by Essex County Executive Joe DiVincenzo and Sweeney, and reconned across the aisle by O’Toole, will contribute to shafting Codey and Rice into oblivion; and whether their baddest intentions for the pair of Essex County renegades won’t bear cool-headed scrutiny, or whether they will line up neatly with GOP arguments about combining underperforming urban districts.

Assemblyman Tom Giblin (D-Montclair), a former state party chairman, said parties contributing to maps that specifically attempt to destroy Codey do so at their own peril.

“If they start screwing around with Codey, they have the potential of having a full-fledged primary and bigger repercussions than that,” Giblin said. “There’s already bad blood out there. Statewide, it could ripple into a possible primary, which is not in anyone’s interest.”

But beyond block to block speculation about how and where next year’s maps will impact the political landscape and the individual agonies of legislatures bracing for impact, stands the prospect of a Christie power surge if Republicans walk away from the table with a favorable outcome.

The Assembly also cooperatively coughed up the budget votes.

Even if the Democrats only lose one upper house seat as a consequence of redistricting, any influx of GOP strength to a legislature already inclined to give the governor the votes when he needs them could produce the equivalent of a Christie supermajority. 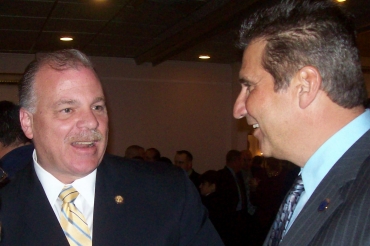