RIDGEFIELD – “We want to get rid of him,” said 78-year-old Barbara MacDonald, daughter of 1950s Ridgefield Republican Mayor Paul Carpenter.

Asked why she thinks Mayor Anthony Suarez is fighting for a position, when – judging from the legitimacy of the other Bid Rig cases – he could soon see the inside of a prison, MacDonald took a stab: “Stupid? I don’t know?”

“I wouldn’t want to be his wife,” she said. Republican Chair Bob Avery, who championed the recall, agreed. “If the voters keep him in office, that would be a disgrace.”

“My father would turn over in his grave,” MacDonald said; she grew up in politics, as did many of the locals, and she said she lost a father to politics. Mayor Carpenter died in office.

The voters are mostly retirement age or older today, but an afternoon rush is expected. Ridgefield also has a large Korean population.

Remembering Suarez’ arrest last year, part of the biggest corruption bust in New Jersey history, MacDonald said, “I was ashamed for our town.”

Her father, she said, never even took a salary as mayor of Ridgefield. It wasn’t until after his death that the council finally salaried the position, and other positions.

Suarez was arrested for allegedly trading development help for cash and funneling the $10,000 into a legal fund rather than deal with campaign regulators. Ironically, the lawsuit he was funding was regarding a libelous claim that he had improper dealings with developers.

Hugo Jimenez, a Democratic council candidate in November and the mayor’s body man today, shot back at Avery.

“Dr. Freud would diagnose him with mayor’s envy.” 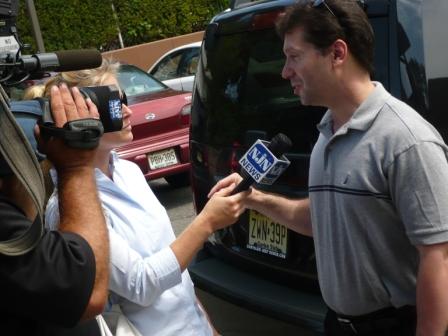