Former Education Commissioner Bret Schundler may have left a document in limbo when he filled a box with his stuff on Friday.
Schundler was holding Jersey City Superintendent Charles Epps’ contract hostage for Councilman Steven Fulop, according to one notorious firestarter.

Conspiracy theories from former Jersey City Mayor Gerry McCann are nothing new; he can pretty much turn anything into a scandalous affair. “That’s a criminal conspiracy if they’re holding this up,” McCann told PolitickerNJ last week.

McCann is alleging that Epps’ contract – while technically in the hands of Hudson County Executive County Superintendent Tim Brennan for review – is actually being held by the state with “no timeline.”  It’s not far-fetched. And while talk of “criminal conspiracy” is de rigueur for McCann, other sources confirmed the state’s hold, although no one else is calling it criminal.

Gov. Chris Christie waged war on the top school administrators by pitching his salary cap this year, which would reduce reign in spending for 70 percent of districts according to proposed guidelines.

But Jersey City has more than 10,000 students, so Epps would be exempt from the cap. And his contract was already approved by the county and J.C. Board of Education once. If it wasn’t for a lawsuit filed by Fulop forcing a revote, Epps would be home free; now the board is waiting on the contract to be re-approved by the county, and although only minor changes have been made, no word has come on how long the review might take.

Insiders claim the board is one vote short of overturning its previous approval of Epps’ contract, which would be a major win for Fulop who’s looking ahead to the 2013 mayoral election. And as time goes by, the likelihood of the contract turning in his favor gets better.
The state can’t nullify the contract extension for Epps, demonized of late for low test scores, unless it finds something legally wrong, but according to education sources, it is conceivable that the state would hold the contract until next year’s Board of Education election in April, when Fulop hopes to add to his three-member bloc on the board.

Alleging another stall, McCann thinks the superintendent search that Fulop and his board members have championed is another attempt to drag out the hiring process of the chief school administrator until he can tilt the board in his favor next year.

Fulop, who recycles this quote every time he has to deny a McCann conspiracy, said, “Gerry McCann should take off his aluminum foil hat. The aliens are not coming.”

“I have no control over this,” Fulop said. “Christie and Schundler are going to review it. Gerry can have all sorts of theories on this.” Now it’s just Christie, so will the contract magically appear?

Alan Guenther, Department of Education spokesman, didn’t say much last week, other than confirming that Brennan is charged with reviewing the document and that the state does not have it.

Brennan said it is in fact his charge to review it, but would not comment last week on whether he has it or the state has it.
With Schundler gone, will Christie hold onto the pact allowing the media to use it as an example of overpaid school chiefs, as the Newark Star-Ledger did recently? 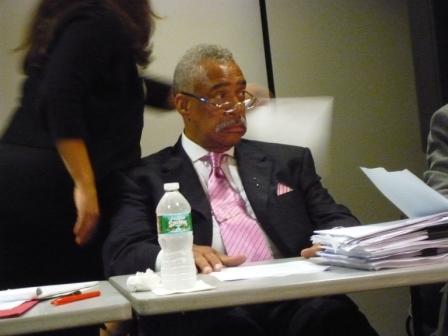