The Teterboro plan is along the lines of what Gov. Chris Christie’s belt-tightening administration was looking for, not to mention ratable-rummaging Democratic powerbrokers. From the outcry at the meeting, it seems the only arguments against divvying up the 1.1 square mile commerce hub come from the Teterboro Sixty. And some local officials who feel they pulled the short straw.

The major objections center on potentially scaring away businesses getting major tax breaks and slamming Teterboro resident with tax hikes.

The town has nearly half the tax burden of surrounding areas, according to reports.

State Sen. Robert Gordon (D-Fair Lawn) told concerned residents and politicians not to worry. Citing law, he said, “In consolidation, there shall be a tax abatement for property owners.” But Gordon didn’t say for how long; 20 years is the proposed time frame, but he gave no guarantee of the deal.

Also, a $225 million redevelopment project with an estimated 2,500 jobs is claiming potentially severe losses as a result of changing the borders and disappearing Teterboro, an “industrial tax haven,” as Gordon has called it.

The Teterboro airport makes up the majority of the borough’s land, and over 10,000 people work there.

The consolidation proposal sponsored by Gordon and Assemblypersons Connie Wagner (D-Paramus) and Vincent Prieto (D-Secaucus), who joined Gordon last night, was sent to the Senate Budget Committee over the summer.

A major complaint among the opposition crowd was that the community meeting was way too late to get buy-in from the 60 residents in the borough.

“We did not expect Teterboro would meet this with open arms,” Gordon said to the crowd last night.

“From the beginning, I wanted this to be a much slower process,” Gordon told PolitickerNJ, but when the Meadowlands Commission’s tax-sharing program appeared as a major hurdle to consolidation, the whole thing became a budget bill and started picking up steam. Nonetheless, he said some good feedback came from the forum, like a woman’s proposal to earmark the increased ratables in absorbing towns and dedicate it to tax relief for residents. “I think we had the whole population (of Teterboro) tonight,” he said in an interview.

Gordon said the governor has committed to working with the sponsors to push the proposal forward. He thinks this model of tax abatement-sweetened consolidation could be a template.

As far as maintaining the character of Teterboro through this split, he said, “We can preserve all that (but) no one really cares who’s picking up the garbage.”

But Watt is being slammed because he lives in low-income housing run by a non-profit organization, while he owns two other houses, in Bogata and Morris County. His government is also being scrutinized for nepotism.

State Sen. Paul Sarlo (D- Wood-Ridge) was not in attendance, even though as mayor of Wood-Ridge he stands to pick up a significant portion of land in the slicing. And his brother is a councilman in Little Ferry, a town which also picks up a chunk.

He told PolitickerNJ last night, “I’m so honored that everybody thinks I’m the architect behind this thing.”

“I support the concept,” he said. “All of the (Bergen County) towns in my legislative district would see a property tax decrease because of this,” including Wood-Ridge.

“The structure of government in Teterboro needs to be revamped,” he said, but to prove he’s not masterminding the deal, Sarlo said he intends to amend it and give a portion of his town’s take to the neighboring town of Wellington. 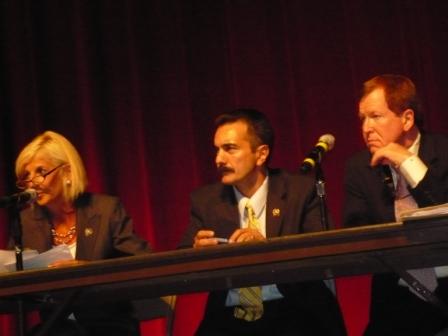