Not only did he brand everything they did a derivative of the old guard Gregorio administration, but he won elections – off the line -and lately, he was showing up with Republican Gov. Chris Christie and those other independent mayors from area Union County towns: Joe Menza of Hillside and Garrett Smith of Roselle.

It was too much – and not the right party image for this old factory town where Democrats dwarf Republican numbers 10,576 to 1,242, yet where the mayor has clawed a base out of Linden’s 7,230 independents.

After enduring four years of Gerbounka, the Dems this year backed Council President Robert Bunk, who figured he would walk through a Democratic Primary against upstart Councilman Derek Armstead – a county programmer and lapsed party soldier – then train his sites on Gerbounka with the full force of the organization behind him.

But Bunk didn’t make through the primary, losing to Armstead 1,704 to 1,972 votes in a low turnout election. The question now is whether the regular Democratic organization intends to back Armstead with the same enthusiasm they might have mustered for Bunk against a sitting mayor who barely squeaked out a 50-49% victory over Mayor John T. Gregorio in 2006.

“Well….” Armstead said in answer to the question, his voice trailing into a chuckle of disbelief.

“We’re hoping everybody does the right thing,” he finally added.

Union County Democratic Committee Chairwoman Charlotte DeFilippo wields the muscle over here in Union, and to date, “I really haven’t heard from her,” the councilman said.

State Sen. Nicholas Scutari (D-Linden), chair of the Senate Judiciary Committee, has offered a verbal commitment of support for the councilman, who like Gerbounka first became a member of the local governing body in 1994, when both men claimed membership in the Democratic Party.

Never abandoning his party affiliation, Armstead nonetheless followed Gerbounka on a jagged path straight out of party favor, with Gerbounka making the fracture permanent and Armstead now hopeful of healing.

Former Mayor Gregorio booted Gerbounka off the line in 2000. Gerbounka won twice as an independent councilman before running for mayor in 2006 and winning. Armstead waited a few more years than Gerbounka before himself taking the plunge into independence, surfacing on the same side as the mayor against a city council dominated by Bunk and the organization.

Armstead never thought their squabbles were so vicious that they couldn’t all get over them – especially now when he’s the candidate who could use the support.

“The primary is when the family fights and now it’s time to come together – if something’s changed, I’d like to know about it,” Armstead said.

Beaten by him, Bunk has been reluctant to vigorously back Armstead publicly. Given an opportunity to sound full-fledged notes of energetic support, the local Democratic Party chairman acknowledges Armstead’s win and the party’s obligation to back him.

“We have a process,” said Chris Hudak. “The process is the primary. We do what it takes to get out the vote. Now we’re going to support the candidate any way we can. Derek ran a very hard and effective primary campaign. The evidence is he won. When he said he was running and in it to win it we took him very seriously he got out his primary vote, and we take him at his word that he wants to be mayor.”

But jabbed for an accounting of dollars and bodies either he or the county organization intend to put behind Armstead, Hudak said the candidate will do his own fundraising, the same way Bunk did when he was the candidate.

Gerbounka said he does not intend to get trapped in the belief that the Democrats are too troubled to pose trouble. But he also has to be honest.

“They talk a good game, but they’re not going to back him,” Gerbounka said of the Dems and Armstead. “They don’t feel it’s his time and quite frankly, I don’t either.”

The scuttlebutt out of Linden during the primary was that Gerbounka had essentially personally recruited Armstead to soften up Bunk for the general election.

Now the Democrats are stuck trying to mount an offensive for turf they believe is rightly theirs. But their nominee is Gerbounka’s oft affirmed ally on the governing body, a fellow rebel from the organization whose biggest policy difference with the mayor is philosophical more than mechanical – this in an old factory town – concerning the city’s form of government (Gerbounka wants it changed to a Faulkner Act form so the buck stops with the mayor, while Armstead wants it to stay the way it is now).

Gerbounka denies the charge that he routed Armstead into the race.

“What happened is when he threw his hat into the ring, he came to the Linden Citizens Association, which is my base – and he said that after he won he would reconsider his position to run for mayor,” the mayor recalled. “I didn’t take that as a concrete statement. We never discussed anything. There were no deals. My feeling all along was ‘we’ll let the voters decide.’

“I did encourage my supporters and followers to vote for Derek Armstead because I felt Bunk was a stronger candidate and we would weaken his position if he came close to losing. I was quite surprised he won.”

While not denying his dislike for Bunk and never too interested in trying to torment the mayor, Armstead told PolitickerNJ.com he has no qualms about beating Gerbounka, and believes he can.

“We’re inside the ten-yard line and our objective is to get this thing in the endzone,” said Armstead, a sentiment echoed by Hudak, who said he believes the councilman can win.

But Armstead still seems to think he might have to do it without the establishment’s help.

“The attitude seems to be, ‘We won’t work against you,'” he said. Linden sources within the organization were less than thrilled to pony up $100,000 they said Armstead demanded upon declaring victory.

As Armstead tries to embrace the party organization again – and they wince at the same scrappy outsider tendencies that earned the mayor a trip off the line – Gerbounka emphasizes Armstead’s departure from the Dems a couple of years ago as potentially the councilman’s main political strength.

“I like Derek personally, but my question is, ‘What took him so long?’ (to leave the very organization where he now tries to curry favor).”

Already longer on the outside, even with the numbers stacked against him, Gerbounka’s content to stay there. 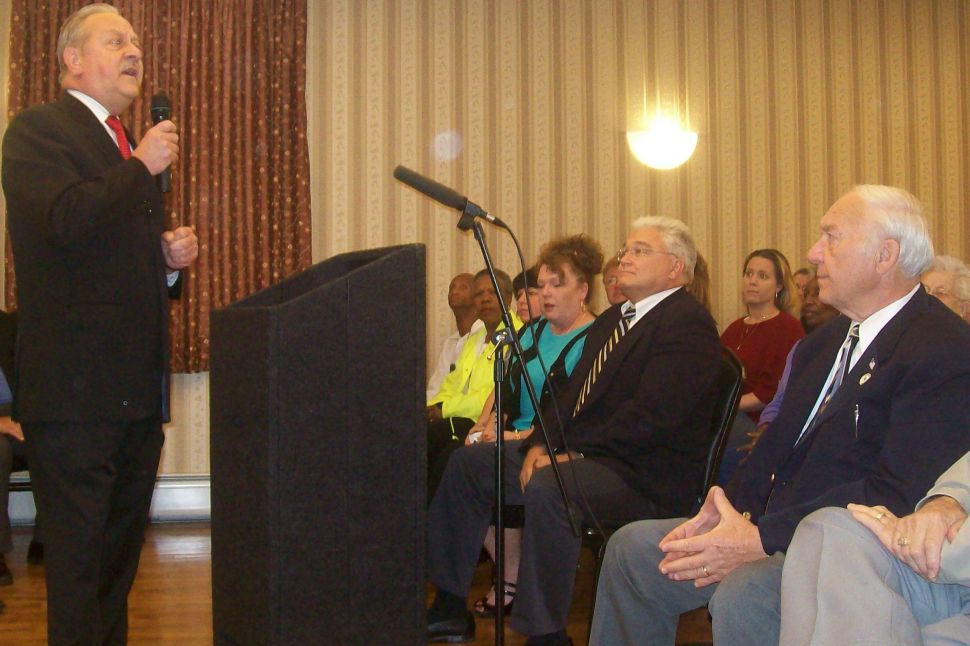