Jerry Speziale’s Tuesday vanishing act from the Passaic County Sheriff’s race threw Democrats into a Harry Houdini huddle-up today as they desperately tried to summon a stand-in for the $1 million dollar man in a county where long-ruling Dems went 0-4 in last year’s county races.

Passaic County Democratic Committee Chairman John Currie could not be reached for comment as sources said both he and U.S. Rep. Bill Pascrell (D-Paterson) undertook a speed dial search for Speziale’s successor.

No one immediately materialized as the can’t-miss candidate to go up against former Undersheriff Felix Garcia, a sheriff’s office stalwart whom Speziale fired.

In the interim, party members quietly fumed over Speziale’s sudden withdrawal from the November general election contest to pursue a job at the New York/New Jersey Port Authority.

“He should donate the maximum amount allowed of his warchest to Democratic organizations,” state Sen. Paul Sarlo (D-Wood-Ridge) said of the departed sheriff, who yesterday told PolitickerNJ.com he intends to offload his campaign funds to various charitable – not political – groups.

Of this group, only Spagnola and Goow affirmed that they’re actively pursuing the job. The Spagnola upswing for Democrats is that the lifelong law and order man has campaign cred (he ran a respectable campaign for Paterson mayor four years ago).

The downside is he claims no party affiliation, publicly endorsed Gov. Chris Christie last year and basked in Christie’s public declaration that he would be the “next mayor of Paterson,” and earlier this afternoon told PolitickerNJ.com he was open to running – either as a Democrat or Republican – on whatever ticket offered “the best for the county.”

George Cole, campaign manager for Garcia, said his candidate has no intention of backing down as the GOP nominee.

“We raised close to $20,000 at our fundraiser last Friday night,” Cole said. “We’ve got to stay on track and stay focused. We believe Felix is the strongest candidate.”

For the record, the sheriff’s job doesn’t demand deep party man roots. Speziale was a Republican who turned Democrat when he ran for sheriff. Garcia was a Democrat turned Republican.

A former Republican himself who turned D during the Obama tide of 2008, Goow tersely acknowledged his interest.

“If I get the nomination, yes, absolutely,” the veteran Ward 2 Councilman replied when asked if he intends to pursue the job.

Goow and his brother are licensed private detectives, and the two Paterson brothers have long been close to Speziale. When Goow ran for re-election two years ago against a candidate backed by then-Mayor Jose “Joey’ Torres, Speziale endorsed him. A special police officer in Haledon, Goow has served on the Paterson City Council for ten years, working his way up to council president this year.

Party operatives who don’t give Girgenti a chance to survive redistricting next year today said the veteran 35th District senator would provide just enough name ID and heft to get the derailed Democrats back into alignment.

But Girgenti’s on vacation and Jill Shortway, his chief of staff, said, “He’s gearing up for re-election (to the senate).”

Morning whispers of the formidability of Glenn Brown, formerly chief of detectives for the County Prosecutor’s Office, immediately went the way of oblivion.

“I’m the director of public safety for the City of Paterson, and I wouldn’t consider a job busier than I have now,” Brown told PolitickerNJ.com.

“But I don’t even know if he lives in Passaic anymore,” the bewildered source said. 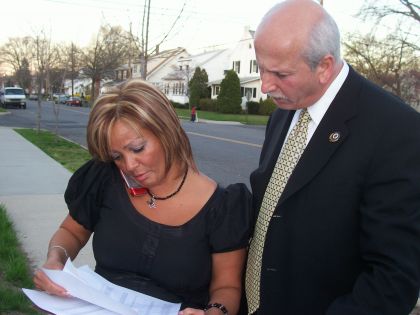