With the news that state Sen. President Stephen Sweeney (D-West Deptford) has announced his pending resignation from the Gloucester County Freeholder board, the list of 20 dual office-holding legislators grandfathered in on Feb. 1, 2008 is dwindling.

Only nine remain, most notably state Sen. Nicholas Sacco (D-North Bergen), who is also mayor, and assistant superintendent of schools in North Bergen. His three jobs – two of which are elected positions – totalled $278,260 last year.

The remaining two-jobbers will fall to eight if Sweeney resigns his post, and to seven if Ralph Caputo (D-Belleville) walks away from his freeholder seat.

Redd, who was elected mayor of Camden, resigned her District 5 seat in January. Donald Norcross (D-Camden) will defend the seat in a special election in November.

Sacco is king of north Hudson and reigns supreme across the county alongside State Sen. Brian Stack, #5 on the list.

Sarlo was another three-gig guy, but he gave up his job as a municipal engineer in Carlstadt last year.

One of only four Republicans on the list, Singer is holding strong in his two posts. As mayor, he lobbied against Gov. Chris Christie’s 2.5 percent hard cap.

Even with two jobs, Stack runs a tight ship in Union City, the most densely populated city in the nation.

Sweeney told PolitickerNJ he’s out at year’s end. Unfortunately the board will carry a court-appointed monitor long after.

Just last week, Burzichelli announced he had pulled state support into Paulsboro, where Christie stopped in to kickoff a port redevelopment on an old brownfield site.

Caputo has been heavily involved in the ongoing Hanson Report discussions, and has indicated he’ll drop one office soon.

Already off the council, Chiappone resigned his Assembly seat this summer after a losing effort to become mayor. He succumbed to party pressure following his arrest for theft by deception. He was replaced by Jason O’Donnell on July 25.

Along with Scott Rumana, they were the only dual office holders to voluntarily resign their secondary posts as soon as the law took effect even though they were grandfathered in.

He joined the Assembly in 2002, but Egan has been a stalwart on the local council approaching 20 years. He didn’t run again this year, giving someone else a chance – his son, who won on a ticket with Mayor Jim Cahill.

Evans stepped down from the freeholder board in 2008 after serving as freeholder director for three years.

McKeon gave up the mayor spot in July after not seeking re-election. His replacement Councilman Robert Parisi just barely pulled out the win.

No longer mayor, Moriarty has targeted perks by other government entity leaders, like EZPass and car allowances at the DRPA.

Ramos walked away from his council seat last year to concentrate on state matters. There may be a move by Mayor Dawn Zimmer to try to take his Assembly seat in the works.

In 2007, Rumana shifted his focus from mayor to being architect of the GOP charge in Passaic County as party chair and his assembly duties.

Schaer continues to hold his seat as council president in Passaic; he was also acting mayor when Mayor Samuel Rivera pled guilty to attempted extortion in 2008.

Van Pelt gave walked away from municipal government in Febuary 2009, before being chased away from state politics following his arrest as the token Republican in Operation Bid Rig III.

Vas lost his 2008 re-election bid for mayor, before walking away from his Assembly seat after indictments came down on him. 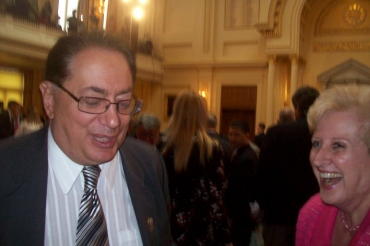