One of the last of the old school breed of strong county chairs, Passaic County Democratic Organization Chairman John Currie this week wants to reverse the disrespect created by the sudden departure of former Sheriff Jerry Speziale, who announced he was aborting his re-election run before sending a formal letter to Currie.

Not only does the chairman want a replacement candidate, but simultaneously, he is trying to buck a trend of tanked party leaders at the county level, including Middlesex Democratic County Chairman John Lynch, whose head adorns the wall of former U.S. Attorney and Gov. Chris Christie; former Bergen County Democratic Organization Chairman Joe Ferriero, who resigned his office to stare down corruption charges; and Hudson County Democratic Organization Chairman Bob Menendez, whose governmental ascent to the U.S. Senate forced his withdrawal from the minutiae of Hudson politics.

A Democrat who remembers hearing about the assassination of President John F. Kennedy as he walked across the bridge over the Great Falls on his way home from football practice, the 20-year veteran Currie’s attempt at strong chairmanship exertion strikes a contrast to other area county chairs from his party who are either relatively new – Ferriero replacement Mike Kasparian and HCDO Chairman Mark Smith – or old and do what they’re told by stronger backroom party allies – or both.

In his search for a short-runway substitute, party sources say Currie wants the opposite of Speziale, a former undercover cop in the NYPD whose resume looked like the working draft of a Hollywood screenplay, and who, in fact, played a hard-nosed captain in the Hollywood blockbuster “Brooklyn’s Finest.”

The sheriff’s department that Speziale left behind generated headlines last week as the feds sealed evidence at the department garage and essentially truncated party efforts to find an in-house replacement. Meanwhile, another option, state Sen. John Girgenti (D-Hawthorne), generated little party enthusiasm and worried Currie, who considered Girgenti’s lack of executive law enforcement experience. The GOP’s candidate, former Undersheriff Felix Garcia, at least wore a badge once; Currie wants to make sure his candidate can land the endorsement of the Police Benevolent Association (PBA) and other union support.

Enter Richard Berdnik, a cop’s cop, in the words of one Democratic Party insider.

“He’s been a Democrat since 2005 and he’s been to our events since that time,” Currie said of the Clifton Police Department lieutenant, whom party sources put at the top of the Dems’ list of people most likely to get the nod to run against Garcia.

New blood Hawthorne Democrats gaped at the apparent selection of Berdnik, untested as a political candidate. A rumor circulated that just as state Sen. Kevin O’Toole (R-Cedar Grove) had bumped Speziale out of the race by greasing the channels to Gov. Chris Christie and a job at the Port Authority of New York and New Jersey, the Essex County GOP chairman was dealing again.

“That meeting never took place, it never happened – and I have intentionally had no contact with John Currie throughout this whole period that they have searched for a sheriff’s candidate: no phone calls, no messengers, nothing,” O’Toole told PolitickerNJ.com, when asked about an alleged meeting he had with Currie a week and a half ago in his hometown.

Currie too completely denied the meeting ever took place. The chairman was in Cedar Grove, but not with O’Toole, he said.

Despite the back-channel agonizing and intriguing among members of his own party one year removed from a Republican sweep in county elections here that now puts the GOP in striking distance of ccounty courthouse control, the main reason Berdnik’s at the top of the chairman’s list is that Currie likes him, according to sources, and in this climate – believes in him politically.

“Girgenti’s my friend, but I want to win,” a source close to Currie quoted the chairman as saying.

Currie trusts that what Berdnik lacks in name recognition he would more than make up for with professional credentials. The PBA play is big with him, one source said.

Since late last week, the rumbling out of the party was that the chairman and U.S. Rep. Bill Pascrell (D-Paterson) had checked their calendars and coordinated a Wednesday afternoon rollout of the party’s preferred sheriff candidate, evidently Berdnik.

But today, former Paterson Police Chief Larry Spagnola submitted a letter of interest to the chairman to be nominated for Sheriff. Spagnola told PolitickerNJ.com that his intention is to force a full vote of the County Committee using machine or secret ballot voting as required by the Party Democracy Act.

“Isn’t that how this works in a democracy?” wondered Spagnola.

Not confirming Berdnik or anyone else as his choice, Currie said Wednesday’s unveiling does not constitute an official act of the county committee, which he acknowledged would meet the following day.

“It is my recommendation,” said the chairman. “I’ve always said that.”

On Thursday, the committee will affix its imprimatur on not only a sheriff’s candidate, but on whether or not it still trusts the old school Currie in the chair. 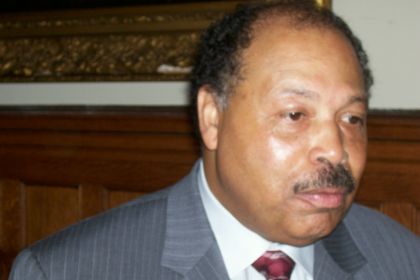