CLIFTON – They crowded into a room here, the Democratic Party candidates for sheriff and the handful left after that, or at least that’s how it must have seemed to Passaic County Democratic Committee Chairman John Currie, whose office phone and cellphone have rung constantly since former Sheriff Jerry Speziale abruptly ended his career and announced publicly that he had moved on to a job at the Port Authority.

“We’ve got to support our chairman,” said U.S. Rep. Bill Pascrell (D-Paterson). “It’s not easy to lose one of your candidates. This chairman will recommend someone to the county committee – someone who will do the job.”

In the meantime, “You’re looking at someone who’s not afraid to take on Wall Street in defense of Main Street,” added the congressman, never looking back at his former running mate.

In fact, in the aftermath of the Speziale news landing with 83 days remaining in the campaign season and spreading glee in the Republican camp with the name of the sheriff’s replacement still in doubt, Pascrell appeared at the front of the room, eyes glinting behind his glasses, after the buildup by his son.

“We’ll sweat together,” the congressman told a standing-room-only crowd that spilled out of the stifling room in downtown Clifton, and stood pressed together on the sidewalk under the massive “Pascrell” sign draped over the front door. The craggy industrial-post industrial street runs past a couple of bars with bikers congregating out front – the second biggest crowd in town – and past pizza parlors-nail salons-bowling alley-funeral parlors-burned out factories, warehouses and single barbed wire strand fences, straight into the City of Passaic.

The river’s on the other side.

With the Democratic ticket suddenly deprived of countywide rock star Speziale, diminutive Freeholder Pat Lepore, who doubles as the mayor of Woodland Park; and hulking moustachioed Freeholder Terry Duffy, a tavern owner, did their best to energize the crowd in brief remarks on this occasion of the party opening their campaign headquarters but finally hyping an only partly comprised ticket with no sheriff’s candidate to run against Republican Felix Garcia.

It didn’t seem to matter in the end.

More time for the main act.

Since squeaking out his first victory over Bill Martini 52-48% in 1996, Pascrell wins his elections roughly 70-30%, and already walloped challenger Roland Straten two years ago. On Friday night he appeared to revel in the situation: three Democratic freeholders and a clerk defeated last year by the GOP, a sheriff gone this week after working a deal with a Republican administration, headline humiliation, and the rival party all the while delighting in the prospect of seizing control of the freeholder board in November.

“I’m down to 165, that was my fighting weight,” barked the congressman, rolling up his shirt sleeves to war whoops. “I’ve got my jacket off, not only because it’s blazing hot, but because I’m ready.

“Let them inflate the balloons,” he cried, referring to the GOP. “But when they count the ballots, that’s the only thing that counts.”

The word earlier in the day was that party leaders here continued to court state Sen. John Girgenti (D-Hawthorne), 30-year veteran of Trenton and the slow motion antithesis of Speziale. On a vacation phone line in Cape May, Girgenti told anyone who tried to get his ear on the issue that he wasn’t interested in sheriff and wanted to run again for senate in the 35th District next year.

“Disinterested” in the sheriff’s job would not by contrast be an apt description of former Paterson Police Chief Larry Spagnola and Passaic Sheriff’s Department Chief Leonard Lovely, who practically squeezed through the campaign HQ door at the same time and stood on display as potential candidates, Lovely in his officer’s uniform and Spagnola in a cool beige blazer.

“He’s a serious contender, yeah, but he don’t want the job,” Spagnola said of Girgenti. “I do. It’s not an easy county to work in. It calls for finesse, expertise. This is not a no-show job.”

“What’s that got to do with anything?” Spagnola asked.

When Pascrell at the head of the room gave him a shout-out – “You were a great chief, that job is no day at the beach,” and then Lovely – “You are an outstanding law enforcement person,” the latter responded in a baritone, “Thank you.” Paterson Council President Aslon Goow, wedged between Passaic Councilman Ken Lucianan and Passaic Mayor Alex Blanco, nodded and grinned when Pascrell likewise acknowledged him as his “sidekick.”

“There are 30 names out there; but that’s our strength. Our strength is ourselves,” exclaimed the congressman, scanning the crowd to see if he had missed anyone – Girgenti was, of course, absent. Mixed among the faces were Assemblyman Tom Giblin (D-Montclair) and former Senate President Carmen Orechio, Freeholder Director Bruce James, Freeholder Grayson Hannigan, Passaic Councilwoman Maritza Colon-Montanez, Paterson Councilman Bill McKoy, Councilman Andre Sayegh, Councilwoman Vera Ames.

The Speziale news shook Currie by his own confession. Control of the freeholder board is at stake in Passaic this year.

If Republicans Walt Garner and Tomas Gomez defeat Lepore and Duffy, they will make Hannigan and James the lone Democrats on the seven-member freeholder board.

Noting that the 2009 three-candidate Republican slate won by a percentage point, spinning the loss as complacency and vying that it won’t happen again this year in the 74,398 to 45,872 D to R ratio county if the numbers simply turn out, Democrats projected no fear of Gov. Chris Christie and the GOP chipping into their power.

“November is a test,” said Assemblywoman Nellie Pou (D-North Haledon). “We’re all going to work hard at it.”

Christie lost to Jon Corzine in Passaic last year, 51% to 44%, and that was without proven winners Pascrell and Speziale on the Democratic Party ticket.

This year… no, Speziale’s not on the ticket, not… since… Tuesday, but the prevailing attitude in Clifton Friday night was someone – really anyone – else can be plugged into the job and win now that they know they can lose. One political insider held up a card with a name written on it – Clifton cop Richard Berdnik – and said he’s the man.

“I’m hearing Vaughn McKoy,” someone else said with a wink.

But there was less worry about a replacement candidate than attention paid to the skinny, white-haired figure at the front of the room, the former mayor of Paterson, who on his own usually crosses over with veterans, cops and firefighters, small business people and up county voters; in short, the 144,000 independents in the 8th Congressional District.

Pascrell appeared in his element when he said, “If you can’t feel it in your heart when you lose, then you can never win,” and pumped his fist during the buildup in acknowledgement of Bill Pascrell, Jr’s observation, “I believe that what transpired last year was the kick in the butt we needed. And there’s one person I want to be in the foxhole with… my father.”

If Speziale, a former NYPD undercover cop, was a legitimate star in the county big enough for the Republicans not to bother running anyone against him three years ago, a bankable reinforcement to any Dem ticket, his departure created no sustained acknowledgement of loss, no mourning period -only recognition of that essential grizzled tide of loss and victory in politics, and the prized toughness that can evolve either way out of those tensions.

The mood was celebratory.

With the shinier, younger Speziale gone, Pascrell was again the lone, hardened dominant elected official on the Passaic County streetscape. 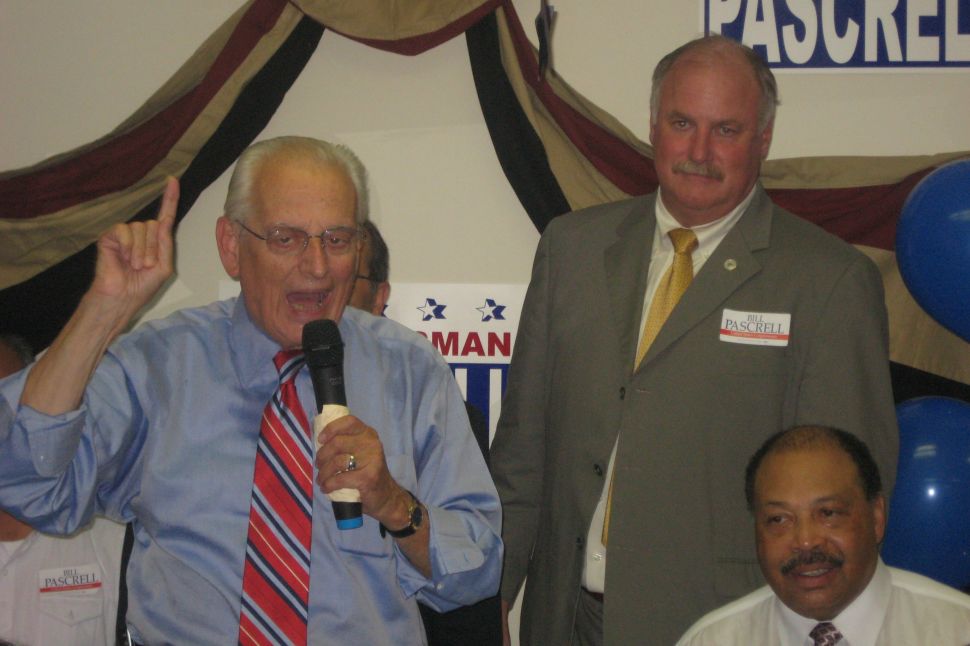