Mayor Dawn Zimmer’s council majority is on the line in a crucial special election in Hoboken’s 4th Ward.

Zimmer vacated the seat when she became mayor last year. Political ally Michael Lenz will defend his council appointment against Tim Occhipinti, a young government major from University of Virginia who has a base deserted last year with the arrest of Mayor Peter Cammarano and energized by city layoffs.

Lenz is playing up the notion that Occhipinti – as much as he claims independence from the group – is just a puppet for the post-Cammarano anti-Zimmer section.

With a lack of specific initiatives laid out, Occhipinti leaves himself open to criticisms like this, especially considering his cast of characters either meets or exceeds the magnitude of Cammarano’s backers. And this is just a special election; the real deal isn’t until next spring.

Admitting to being at the meeting, Ramos said, “I’ll probably be supporting Tim. Right now, it seems he’s got a lot of support in the 4th Ward, and across the whole city.”

Asked if the election is gaining steam from anti-Zimmer sentiment, Ramos said, “I’m sure some people feel that way. I’m sure they feel that way about Lenz, too.”

Occhipinti said, “Our campaign appreciates any and all support to get me elected to serve the residents of this ward. We’re not exclusive.”

But he hasn’t responded to a campaign pledge put out by his opponent last week calling for an armistice on paid campaign workers who vote absentee.

In these cases – one of the more common circumstances where paid votes are obtained – the voter’s vote can be verified by campaign backers, unlike in a voting booth, before payment is given on the basis of being a campaign worker, although rarely is work required.

Occhipinti said he has nothing to do with any absentee campaign. “I’m personally not pushing absentees.”

Included was Number 8: “Given Hoboken’s history of absentee ballot abuse by those employing paid workers, eliminate the appearance and possibility of buying absentee votes by refusing to hire any able-bodied Election Day workers who are voting absentee, period.”

Occhipinti’s campaign hasn’t signed the pledge, but said that they won’t be paying workers for votes.

“It may be a loophole,” said Occhipinti campaign spokesman David Cruz, “but it’s not one we’re going to use. We don’t endorse anyone getting compensation for their vote.”

“Michael Lenz is so adept at all these loopholes,” Cruz said, that’s why he put them in the pledge. “It’s campaign silliness.”

On issue of a shadow campaign, Cruz said, “I don’t think there’s a campaign going on outside of our control. This is Hoboken, people take sides. It’s not difficult to get people on our side.”

An absentee ballot campaign with over 622 applications in the field may have been wishful thinking, according to the source who boasted the number to PolitickerNJ recently.

The source now believes the number was inflated when relayed to him, to bolster more support and intimidate the enemy.

Gerry McCann, embattled former Jersey City mayor, is a veteran of the Hoboken 4th. He captained the absentee campaign against Zimmer in her ward upset in 2007.

McCann pulled 208 absentee votes in November, a third do-over election between the two. Zimmer collected 144, in a counter attack headed by Raia.

Absentees accounted for 21 and 13 percent of their vote for Campos and Zimmer, respectively.

Now, ironically, Raia is partnering with some of McCann’s understudies from 2007 against Lenz and Zimmer, sources said.

The anti-Zimmer/Lenz support group will be happy with between 300 to 500 absentee votes, one of the sources close to the shadow campaign said.

McCann thinks, “It’s clearly possible (to get 400 absentee votes). The real key is you have to get (voters) to (follow through).”

Another problem with unreasonably high absentee totals is that they are likely to get challenged in court.

McCann said the mistakes usually include chain of custody problems, residency issues, signatures discrepancies, or exceeding the messenger limit of 10 per person.

“If I trained them,” McCann said, “none of them will get thrown out (in court).”

“There’ll be residency issues,” McCann said, recalling an instance three years ago where one woman had four adult men registered to vote at her small, two-bedroom apartment in the Hoboken projects.

“There’s a lot of noise on the ballot,” Belfiore said, and older people and language-barrier residents many times need help navigating.

Allegations and actual instances of pay-for-vote complaints have dogged Hoboken pols for years.

“I think you’re not going to see 600 absentee ballots in the 4th Ward, or else somebody’s going to jail,” said another veteran of Hoboken elections.

“I don’t think anybody is looking to get paid for absentees,” a separate source in the shadow campaign said, “because they want to come out against Lenz.”

Outside of paid votes, though, the source said, “There’s always that (absentee) push when Frank Raia’s involved.”

Raia said, “I’m making a concerted effort to get every resident of the 4th Ward out to vote. If it means we have to pull people out, if they have to vote by mail, if we have to drag them to the polls, whatever. There’s a lot of disgruntled people in Hoboken.” 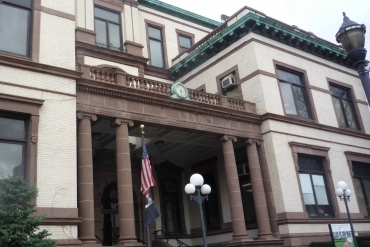