As Atlantic City developed over the past 30 years into a city of haves (the casino bosses) and have-nots (everyone else), competition began to emerge on Indian reservations. In 1988, Congress passed the Indian Gaming Regulatory Act, which allowed Indian reservations to host gambling with state approval. In 1992, the Mashantucket Pequots opened Foxwoods on their reservation five hours to the northeast of Atlantic City, in Connecticut. The casino, with its table games and slots, was nicely situated between New York City and Boston, and quickly became the most profitable in the nation, earning an astounding $1 million in revenue daily.

Moneyline‘s business correspondent Jan Hopkins chimed in: “There are now 88 casinos in 18 states run by Native American tribes. All started in the last three years. Revenues have tripled to more than a billion dollars. Riverboat gaming is another threat–the fastest-growing segment of the gaming industry, up 400 percent last year. Potential sites include neighboring Pennsylvania. Unlike Atlantic City, Las Vegas is keeping ahead of the changing market by expanding gaming to include family entertainment. Vegas is going after the leisure traveler. The day-tripper is still Atlantic City’s bread and butter. Analysts warn it needs to expand the menu.”

In 1995 and 1996, slots at Dover Downs and Delaware Park and Harrington Raceway all opened, about two hours west in Delaware. In 1996, Mohegan Sun opened near Foxwoods in Connecticut.

The increasing competition did not go entirely unheeded. In 1997, Atlantic City got a convention center. Talk began to turn toward widening Atlantic City’s demographic appeal, to lure what the current mayor now describes as “yuppies and buppies.” In 2001, a $330 million tunnel opened that linked the Atlantic City Expressway with the city’s marina area, site of Harrah’s, Trump Marina, and the $1 billion Borgata casino and hotel, completed in 2003. In 2002, Harrah’s completed a $200 million expansion, building 452 new hotel rooms that it claimed were on a par with high-roller Las Vegas luxury.

Some of the investment even improved downtown Atlantic City. In 2004, developer David Cordish replaced the abandoned housing that used to greet visitors with an outdoor outlet mall called the Walk. So successful was the Woodbury Commons-style mall that in 2007, Mr. Cordish completed an expansion, and today is embarking on a third phase. In 2008, hotelier Curtis Bashaw finished the $110 million Chelsea, which transformed an old Holiday Inn and Howard Johnson into a boutique hotel, with two Stephen Starr restaurants and bars influenced by the stylish crew from Beatrice Inn.

In early 2009, an express train called ACES was launched, with direct weekend service between Atlantic City and Penn Station, with only one stop, in Newark (previously training from Manhattan meant a pastiche of New Jersey Transit and Amtrak; that or the bus). Between 2002 and today, 45 new restaurants were built, according to Jeffrey Vasser, the president of the Atlantic City Convention & Visitors Authority and the former chief financial officer of Cipriani.

Yet if the recently burst economic bubble brought an Atlantic City building boom, it also ushered in yet more competition outside of the casino town. Pennsylvania legalized slot machines in 2004. The year 2006 saw the opening of Mohegan Sun at Pocono Downs; the Philadelphia Park Casino and Racetrack; and Empire Casino at Yonkers Raceway in New York. The following year, two more Keystone State casinos opened: Harrah’s Casino and Racetrack in Chester and Mount Airy Casino Resort. In 2008, the Hollywood Casino at Penn National Race Course joined the gold rush. In 2009, the Sands Casino Resort opened in Bethlehem. In January 2010, Pennsylvania legalized table games. Now, Massachusetts is considering legalizing gaming, and many predict New York will be next.

Mayor Langford Leaned closer to the table in his pink-walled Bacharach Boulevard conference room last Thursday afternoon and etched out an ambitious plan for the endangered casino town. The former pit boss cupped his hands like he was about to lead an invisible game of three-card monte, but instead began laying a plan for the city on the wooden table, his long fingernails click-clicking on the wood all the while.

“I have a goal of developing a comprehensive entertainment-slash-recreation complex that has among its components movie theaters [click], roller skating rinks [click], a bowling alley [click], a family fun action center like your Dave & Busters [click], a museum–it could be the New Jersey hall of fame of museum,” said Mayor Langford, dressed like only the mayor of Atlantic City could be: bright yellow tie on yellow shirt with black-and-white checkered collar and cuffs, oversize gold-and-crystal links, a mustache and a soul patch. “If you have all of these kinds of things in one area, that becomes an attraction in and of itself, and would draw people to Atlantic City who would come for that reason and gamble while they’re here.”

Casinos as merely the sideshow, rather than the main attraction in Atlantic City? That would constitute a reinvention the likes of which the city hasn’t seen in 30 years. And one upon which the city’s future is dependent.

“Clearly,” said Jim Whelan, a former mayor and current state senator, “this is the biggest challenge we’ve faced in the casino era.”

On Friday morning, Joseph Amendolare, a lanky, 60-year-old garbage truck driver from Rego Park, Queens, with a deeply creviced, handsome face, sat outside of Harrah’s casino in the town he’s been visiting some 20 years. A reporter asked him if he was excited for the arrival of the Aqueduct, a racino in his home borough that, after years of missteps, may actually get built.

“I can’t wait,” Mr. Amendolare said, his tall shoulders hunched beneath an unzipped red sweatshirt. “I live like five minutes away.”

With the collapse of the economy, and the drying up of tax revenue, experts predict more states will join the throng of municipalities looking to benefit from America’s seemingly limitless appetite for gaming.

“In Massachusetts, it’s heated up a lot more; in New York, it’s certainly heated up,” said Richard McGowan, a gaming expert and professor at Boston College. “The casino thing will look like the lottery in 10 years time. Almost every state will have something.

“And then the next big fight will be Internet gambling,” he continued. “What do you do about that? Then the ultimate fight will be sports gambling.”

If that sounds dystopian, in a way it is. The legalization of gambling is something of a Faustian bargain, offering ample tax revenue and employment in exchange for a heap of social ills.

“The whole point of gambling is to take people’s discretionary income and make sure they spend their money in certain places, and not other places,” Mr. Simon, the Boardwalk Dreams author, said in an interview. “Gambling is a fundamentally anti-urban enterprise.” It also causes addiction and bankruptcy.

Or as put by Billy Procida, a New York and New Jersey developer who tried to buy the site of the delayed Revel casino project–and thanks God he didn’t: “[Machiavelli’s]  theory was that during times of peace, he believes you should always be at war or preparing for war. If peace reigns too long, what you’re left with is a society of prostitutes and gamblers, and then it eventually falls apart.”

On July 21, a state commission created by executive order released a study titled “An Economic Recovery Plan for the State of New Jersey,” one of whose central facets was the resurrection of Atlantic City. The report gave a blunt assessment, while also noting that its casino industry accounts for nearly $1 billion in tax revenues annually, some of which funds programs for senior citizens and the disabled throughout New Jersey. The report concluded that “Atlantic City has no choice but to try to reestablish itself as a true ‘destination resort.'”

To that end, the commission advised the creation of a special casino and tourism zone to be governed by a public-private authority whose members would include city and state representatives, as well as representatives from the casino industry. The authority would handle crime and cleanliness issues, woo investors to Atlantic City and diversify the economic base.

Mayor Langford, to the surprise of some observers, seems relatively unfazed by the recommendation that a public-private authority usurp some of his mayoral powers. But there are other obstacles–notably legislators from northern New Jersey, who oppose a corresponding commission’s recommendations for ending the gaming industry’s subsidies of horse racing at the Meadowlands.

“I think the key is not so much the Atlantic City piece; I think there’s a willingness within the Legislature,” said Senator Whelan as he lunched at the Knife and Fork, a historic eatery near the boardwalk across from another stalled development site. “I think the key, frankly, is to find ways to help the horse-racing industry and the Meadowlands so that everybody wins here. We don’t want a situation where the horse-racing industry is forgotten about and the Xanadu project in particular remains incomplete.”

Even if the Legislature rejects the plans of Governor Christie’s commission–and some analysts say the chances of that are likely–there are other ways to go about implementing its spirit, if not its letter. Mayor Langford has established an independent strategic committee, comprised of local stakeholders, that espouses a similar prescription: diversification and greater cooperation.

“Here’s what I did: I said, ‘We all may have gotten to where we are right now having arrived in different boats, but we’re all in the same boat now,'” the mayor said. “And unless and until we drop our oars in the water at the same time and row simultaneously, that boat’s going to sink. But if we get on the same page, can’t nothing stop us.”

According to the mayor, who plans to issue a formal action plan in November, the committee is already bearing fruit. He said this coming spring the city will host a rodeo, and, on Christmas, it will host a large ice skating event featuring former Olympians, to be aired live on NBC.

Senator Whelan likes to say that Atlantic City “is a little bit like Dracula. You can’t kill us. We keep coming back.”

Maybe so. Surely, the Christie proposal, the Mayor Langford commission and the unprecedented collaboration between casino owners and local officials–not to mention the imminence of Boardwalk Empire, which will likely spawn all manner of Nucky Johnson-inspired tourism–can only help.

This is the strip of Jersey, after all, that inspired Bruce Springsteen to write, in that same melancholic 1982 song, with its hard-luck narrator about to take one last shot at success: “Put your makeup on fix your hair up pretty/And meet me tonight in Atlantic City.” 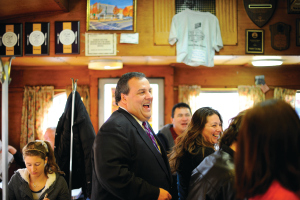