A sign on the wall here read “Fire Pelosi,” and that was a theme fiercely echoed and re-echoed as this party delights in the prospect of retaking control of the U.S. House.

“Chris Christie was elected governor last year with 65% of the vote in Ocean and you should be congratulated for that,” said Webber, standing with Runyan and Ocean County Freeholder Jack Kelly in a crowd that included Gov. Christie’s father, who lives in Ocean, Ocean County Administrator Carl Block, Cape May County Republican Chairman Michael Donohue, and numerous local elected officials.

“We are turning around New Jersey under the governor’s leadership. …We have the best governor in the nation, who’s changing the debate nationwide,” added Webber. “He is the answer to Nancy Pelosi and Barack Obama. Each of you can take credit for that. …We have a lot of momentum from last year.”

But Webber presented the football hero as a blue collar Cinderella story, who built a private sector success story based on old school values, in contrast to Adler, who toiled as a Trenton drone in the McGreevey-Corzine years, and now wears another political albatross around his neck, according to the GOP leader.

“John Adler is a Nancy Pelosi Democrat,” Webber said. “He is part of the problem and he needs to go.”

The state Republican chairman later elaborated on his party’s aversion to the House speaker.

“She’s clearly one of the most unpopular figures this country’s ever seen,” Webber tod PolitickerNJ.com. “She shoved a far left agenda down the throats of the people: national healthcare, record spending. People don’t appreciate her leadership.”

Runyan accepted the microphone from Webber in this county that contains 176,365 registered 3rd District voters, compared to 195,684 in Burlington and 45,941 in Adler’s Camden. A man in the front of the crowd waited with a football and magic marker. Another woman had a child’s Eagles football helmet tucked under her arm and a marker in hand.

“Get this seat back in Republican hands,” said the Congressional candidate. “Fire John Adler and fire Nancy Pelosi. We started something with the governor. When you start a fight, you need to finish it.”

Endorsed by the Veterans of Foreign Wars PAC yesterday afternoon, Adler lamented the state of the race. He has had two forums with Runyan and is scheduled for a third on Sept. 13th. In 2008, he debated 13 times with Former Medford Mayor Chris Myers and enjoyed the competition.

“It’s not as fun this time,” Adler acknowledged. “The Republican candidate’s not around.”

But Runyan basked in Ocean last night, with 60 plus days until Election Day in a traditionally GOP district that Republicans say Runyan should win with little difficulty provided he doesn’t implode. All he has to do is stay on message, said one Republican insider at Wednesday night’s event, and he wins.

At the end of his speech, just before warmly accepting the first football put in his hands to be signed, Runyan told the crowd, “Remember, fire Nancy Pelosi.” 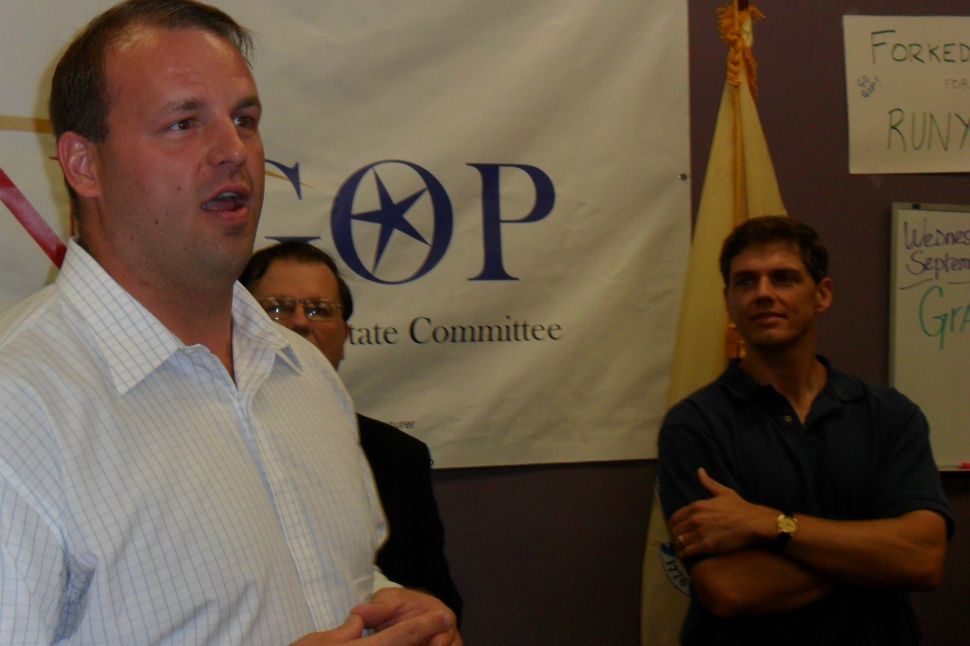