Gov. Chris Christie’s entered a town hall meeting in Gloucester Twp. this morning, and over the speakers blared, “Glory Days, yeah, they’ll pass you by.” Although Springsteen lyric aptly describes Christie’s stance on the topic of the day – pension and health care reform, the second leg of his reform tour – The Boss’s words may be hollow here today.

Christie is triumphantly calling for serious and deep-rooted reforms of public employee benefits, but his trumpet call may be in vain.

State Sen. President Steve Sweeney (D-West Deptford) preempted Christie’s clarion call with a demand of his own yesterday: fund the pension or your reform bill will rot on the vine.

A $46 billion pension fund shortage needs attention, before it becomes an $85 million problem 15 years from now and $181 billion by 2041.

“I got two choices: walk out or clean up, and we’re gonna clean up,” he said to applause.

Not shy about taking a swing at his own party, Christie blamed a 9 percent pension boost in 2001 as a major contributor to the runaway costs. At the hands of a Republican governor and legislature, he said it was “bestowed upon special interest groups who represent public employees.”

His pension and benefit plan is multifaceted.

First he wants to eliminate the 9 percent boost going forward – “What we’re saying is, no more” – and increase the retirement age to 65, except for public safety employees.

For early retirement, he proposes eligibility after 35 years, rather than 25.

Furthermore, Christie wants to increase the early retirement penalty to 3 percent per year under 65, and begin calculating pensions based on the average of the highest five years of service, rather than three years as is currently law.

“I know you’d be shocked to hear that sometimes politics play a role in (gaming the system),” Christie said.

For police and fire, pensions are currently based on 65 percent of the highest single year of service; Christie proposes the highest three years.

He thinks retirement eligibility should be granted after 30 years of service, rather than 25, or else only 60 percent of the final pension calculation.

“We really don’t want 65-year-old policemen chasing criminals down the street,” he said.

He tells public employees who are sour on reform: “You’re going to look back and say this was the governor who saved your pension.”

Currently, contributions vary among the five public employee groups, from 3 percent contributions from the judiciary employees to 8.5 percent for police and fire.

Pensions are all about numbers; they’re not magic,” he said.

“We elected the wizard of Wall Street four years ago, with those skills that he developed making all that money … Well, here we sit,” Christie said. “You can do without any more of that kind of magic.”

Christie also proposed doing away completely with the Cost of Living Adjustment for good, at least for now.

“None of these things that I’m proposing is going to be a picnic to get through he state legislature,” he admitted.

Especially not if Sweeney and Co. have anything to say about it.

“The Governor is halfway there,” Sweeney said in a statement. “We do need further reform to keep the public pension system afloat, but we also need show we are committed to making the system work for the lifelong employees who are relying on it for a secure retirement. “The Governor must follow the law he signed only six months ago and put money into the pension system. I am more than ready to sit with the Governor and discuss needed reforms, but they will not move in the Senate until a check is cut, deposited and cleared.”

Assembly Speaker Sheila Oliver (D-East Orange) took a gentler tone, promising that her members would discuss his proposal but calling on Christie to bury the hatchet with the public employee unions.

“I am tired of the approach that divides our state. Leaders unite and build consensus. They do not divide and conquer and create enemies of the people who teach our children and protect our safety,” she said. “I strongly encourage the governor to sit down with the public worker unions and negotiate meaningful reforms. All sides should do this with an open mind, without acrimony and the goal of doing what’s best for all taxpayers.”

On an audience question about his reforms at the Delaware River Port Authority, Christie indulged in his persona.

“They pushed ($400 million in development funding) out the door in the last week before the big bad wolf was coming to Trenton.”

Well, the wolf is at the door. 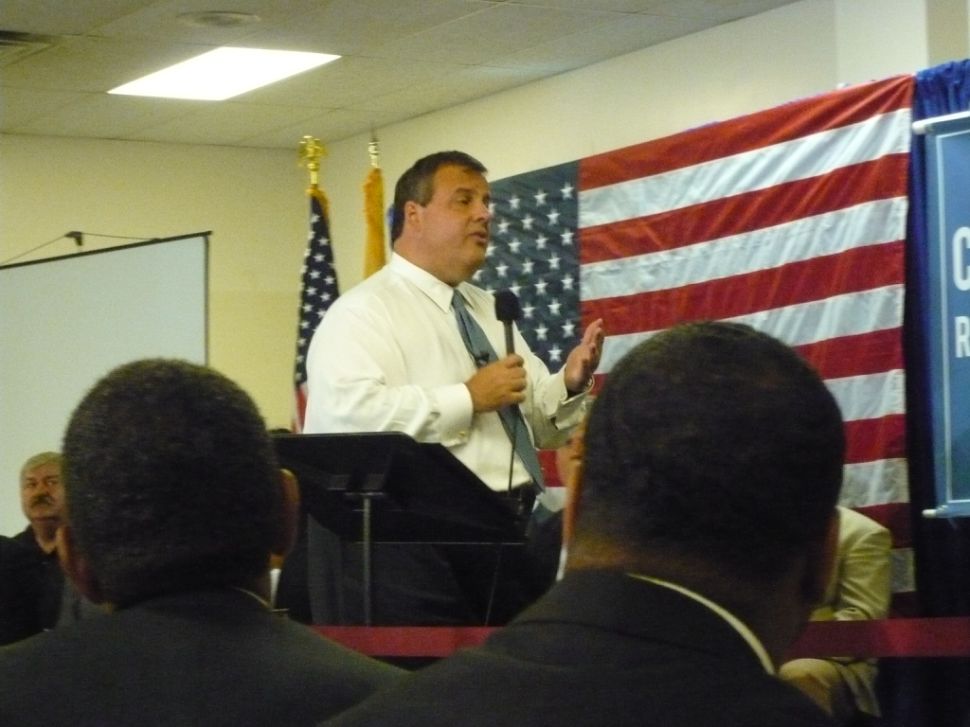