NEWARK – A day after the two men appeared on the Oprah Winfrey Show to accept a $100 million challenge grant for public schools, Gov. Chris Christie and Mayor Cory Booker reconnoitered here to assure Newark residents and leaders that distribution of the cash would hinge on community involvement.

“Everything’s on the table and nothing’s off the table,” said Booker. “Community consensus.”

Christie said of the mayor, “Cory will make sure we get community involvement.”

“I have very determined educational views,” Booker said. “Let’s trust Newarkers to be able to make the common commitment to… what that education should be.”

Zuckerberg’s cash will go to district and charter public schools, and – despite Christie’s and Booker’s mutual vouchers’ advocacy – won’t be used to facilitate vouchers.

“We need to fix the public school system,” said Booker. (Vouchers education alone) “is not going to solve Newark’s problem. …We’re confident Newark, New Jersey can be the finest district in America.”

Christie added, “This is about fixing the public school system.”

Combative at the microphone after four days out of the state, Christie savaged the leadership of the New Jersey Education Association (NJEA) as a cynical barrier to education reform.

“This is not going to make everybody happy,” Booker admitted.

The focus here was the children.

“For any of those who want to talk about other things, they’re going to have to sit on the sidelines,” said the governor.

But one Newarker remarked that the timing of the Zuckerberg gift helped all three big shots. The politically embattled Booker faces a budget gap in Newark, the prospect of laying off police and firefighters and – even with that – executing double digit tax hikes. Christie, for his part, still trails the entanglements of the federal Race to the Top fiasco. And a Hollywood movie with a negative take on Facebook puts Zuckerberg in evasive action mode. 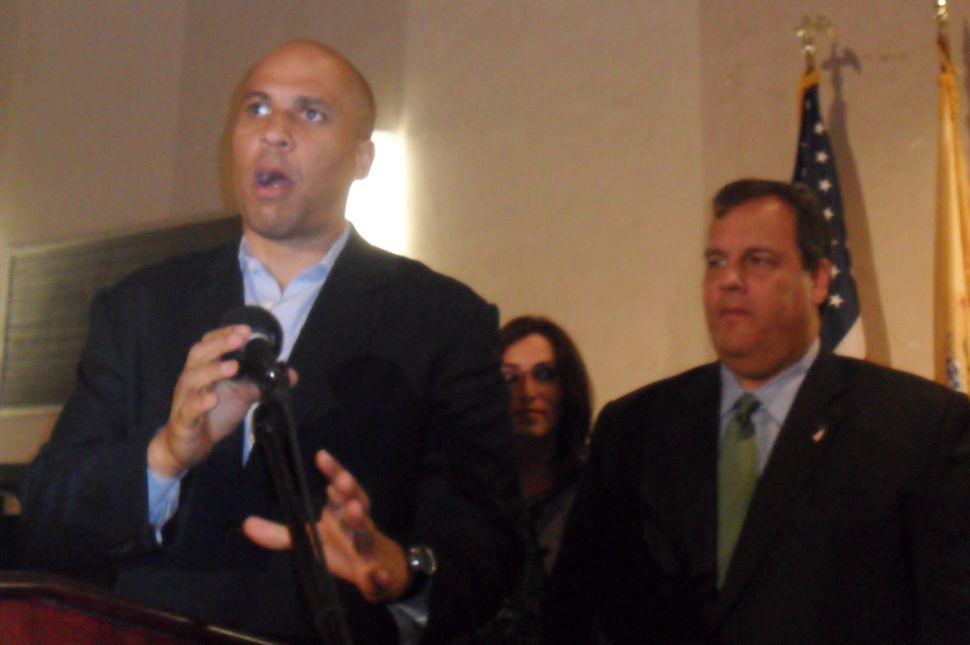