Putting shovels in the ground and paychecks in the pockets of New Jerseyans. This was the charge of Lt. Gov. Kim Guadagno when she joined Gov. Chris Christie’s team last year.

Today, Guadagno and Christie put shovels in the ground with Coca-Cola Enterprises (CCE) in South Brunswick to kick off the construction of CCE’s largest sales and distribution facility on the east coast, employing 650 associates.

At the event, Guadagno touted her three-pronged New Jersey Partnership for Action, mechanisms she said will restore business interest in New Jersey.

The first component is to raise the business profile of the state, which is what Christie will be doing on his cross county campaign trail trip, Guadagno said.

(The EDA was “instrumental” in bringing in Coke, Guadagno said, although CCE officials said no tax incentives were provided.)

The third element to Guadagno’s Partnership for Action is the New Jersey Business Action Center (NJBAC).

Coca-Cola Enterprises (CCE) is building a 270,000-square-foot sales and distribution center in Monmouth Junction. CCE is headquartered in Atlanta and responsible for 80 percent of U.S. sales.

The warehouse is a consolidation of several locations in the region and should July 2011.

With Campbell Soup, Honeywell, and Pitney Bowes, Coke is the fourth Fortune 500 company to expand in New Jersey.

Christie said today that the state is “looking for ways to say yes, not looking to put hurdles up” for businesses.

Bureaucracy can be “mind numbing,” Christie said, and challenging in a business sense, but he intends to make sure government is “no longer a major impediment” to business.

“I know it’s hard to believe there are issues with permitting in New Jersey,” he quipped.

Because of its available land and central location between New York and Philadelphia, the area around South Brunswick is a burgeoning distribution hub, with the recent additions of Jacques Moret Inc., an apparel design distribution of Joe Boxer and DKNY, and Williams-Sonoma, whose distribution center leases 1.4 million square feet around the corner from the Coke site.

“From India to Mexico, where bottling plants are suspected of decimating supplies and spreading toxic pollution; to Columbia, where Coke union organizers are reportedly being killed for trying to protect their rights; to America, where super-sizing and exclusive soda contracts with schools have in part fueled a childhood obesity crisis, ‘The Coke Machine’ exposes the costs behind one extremely influential company’s quest for international success,” according to Blanding’s website.

Neither Michael Sullivan, CCE president of marketing, or Michael Drewniak, Christie’s spokesperson, would comment on the allegations of the book.

Christie’s stop in South Brunswick was quick – less than a half-an-hour – and he left before taking questions from the press. 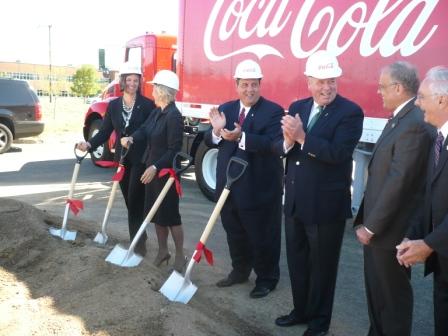