Gov. Chris Christie moments ago nominated David Samson as chairman of the Port Authority of New York and New Jersey.

A founding member of Wolff and Samson and former state Attorney General (2002-2003), the powerful Essex County attorney has been a key player in both the election of candidate Christie and in the development of Christie’s cabinet. Samson served as counsel to the gubernatorial election campaign and as the Chairman of the Transition Committee for Governor Christie.

“David and I share a similar commitment to the goals and the future of our administration and I am thrilled that after so many years of serving the state in various different capacities, he is willing to accept this moment of service as well,” Christie said.

Christie joked that the two men share a special bond due to death threats made by gang members against both when Samson was Attorney General and Christie was U.S. Attorney.

Samson said he hopes to continue to use the PANYNJ as an engine for economic growth and said he plans to increase the agency’s safety efforts.

“If my nomination is confirmed by the senate it would be my intention to increase the authority’s resources and amp up its efforts to deal with homeland security agencies at the federal state and local levels,” he said.

The governor urged swift confirmation of Samson in the legislature, as a contrast perhaps to stalled state Supreme Court nominee Anne Patterson, who comes out of the Samson legal stable.

“I would urge them given the important matters that are in front of the Port Authority and given all of them having fairly extensive knowledge of Mr. Samson and his career that we get swift hearings before the senate judiciary committee and a swift confirmation vote in the senate so Mr. Samson can be there to help steward  a number of really important projects that need to be done.”

While Samson would replace Coscia as chairman, he is actually filling the seat vacated by Angelo Genova.  Christie said Coscia will remain on the board “for the time being.” 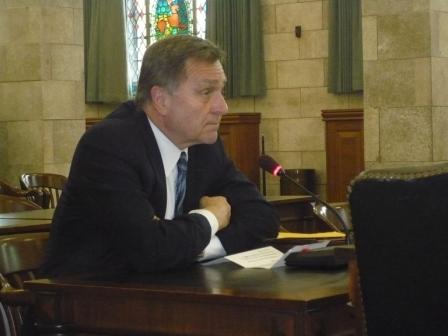