“Your performance was awful, but we don’t look at that,” Christie said, lampooning New Jersey’s teacher tenure system. “All we look at is, are you still breathing. Congratulations, you’re still breathing. Open up your bank account, here comes your money.”

“No other profession deals with its failures that way,” he told the crowd gathered in an Old Bridge municipal building.

He detailed six reforms, including two that need legislative approval.

1. Data systems: He said the state will dedicate $10 million in both the 2012 and 2013 Department of Education budgets to improve the NJ SMART student data center. Because, Christie said, in order to tie teacher pay to student success, the state has to know when students are succeeding.

2. Teacher evaluations: Before coming on stage, Christie signed an executive order to create a Task Force on Teacher Effectiveness. He’ll appoint nine members who will present the governor with a teacher performance system in six months.

The system, he said, will use student performance as the primary component, although he said, “There is no pre-conceived result that I want here,” other than a “fair and thorough” evaluation process.

Teacher tenure, pay, licensing, recruiting, among other items will be tied to this performance evaluation.

3. Increase principal pool: Christie said his administration will create “alternate route programs” to increase the pool of available principals, “with out all these requirements that we (currently) put in the way.”

4. Master designation: In order to “expand professional opportunity” to successful teachers and administrators, Christie is creating the rank of “master teacher” and “master principal” to encourage successful educators to remain in education.

Some of the benefits are increased pay, further training, and a “streamlined” path to creating their own charter schools.

5. Restructure compensation: Seniority-based pay will not work, he said.

Nor will granting pay raises to non-relative graduate degree attainment.

These compensation systems should be based on merit, and whether they “demonstrably” increase student performance. He’ll need the legislature’s help on this one and the next.

6. Base tenure on merit: Christie said tenure makes sense in the context in which it started: Higher education. But in lower schools, he said, “Tenure becomes a job guarantee,” regardless of success.

Tenure, Christie said, is “the sclerosis that coats the veins of our school system.”

Under his proposal, tenure could be removed based on performance metrics.

“I don’t bash teachers,” Christie said. “I bash their stubborn, self-interested union. That’s who I bash.”

He said the American Teacher Federation pumped $1 million into the mayor’s race in Washington D.C. to combat this type of reform.

Christie said he and Newark Mayor Cory Booker have secured $40 million of their $100 million match the donation of Facebook founder Mark Zuckerberg.

But that $200 million pales in comparison to the taxpayer’s $900 million that went to Newark schools last year.

“It’s a fraction of the money that you already spent,” he said.

“Go to some of the schools in Newark,” he said. “See if you can possibly learn with that leadership, or lack of leadership (…) We are going to pick a great superintendent for that district.”

He called out Newark teachers who “artificially rigged” graduation rates to keep their jobs, and said the $24,000 per student costs in the Brick City shouldn’t produce a 50 percent high school dropout rate.

“We are paying a king’s fortune for an education system that isn’t giving our children the royal treatment.”

On his sign hung stage-left, 84 days remain for the legislature to pass his reforms before disappearing for winter break. 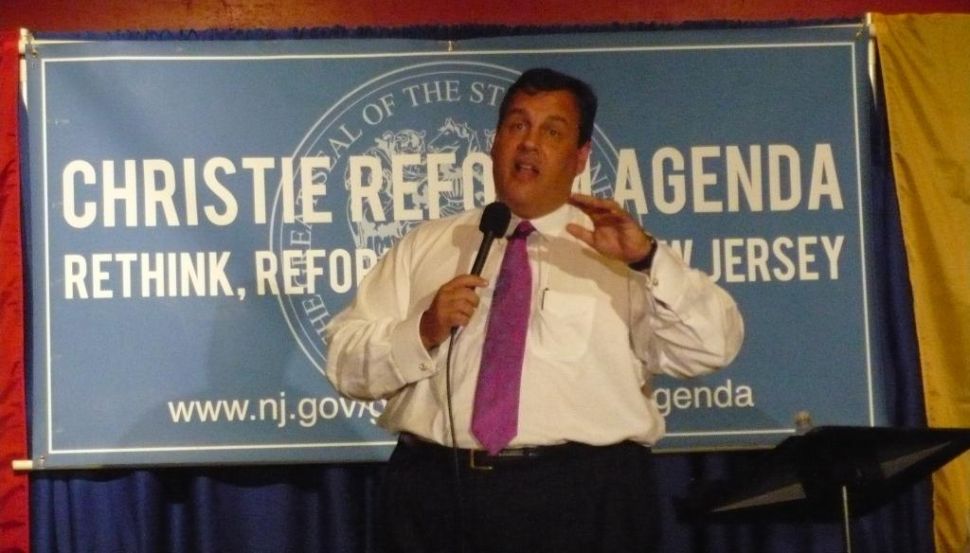