The Governor’s Office today will submit a notice of intent to the senate, requesting support for the nomination of state Sen. Phil Haines (R-Mount Holly) to the state Superior Court, according to Statehouse sources.

The senate cannot act on Haines’s nomination for at least a week.

If the governing body confirms the moderate, pro-labor senator this year, the election for a Haines replacement will occur in 2011. 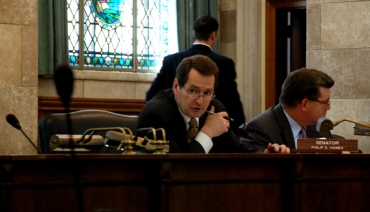