CAMDEN – So about that $400 million… Twap! Gov. Chris Christie just changed the question.

Outside the Delaware River Port Authority headquarters, CEO John J. Matheussen was front and center today, as was the strong arm of the governor making anyone with excessive taxpayer-funded employment benefits at any authority or commission uneasy. Matheussen even publicaly warned the other authorities and commissions to shape up before Christie found them.

Last night, Christie pulled out his veto pen to reject DRPA board minutes, and effectively put the onus on Matheussen to carry out the reforms Christie recommended.

“I’m going to communicate that to the vice chairman and the board,” Matheussen said.

Matheussen was accused by former Pennsylvania legislator John Lawless (who was in attendance at the press conference in a non-official capacity standing behind the press) of asking Lawless to construct a time table that would push through projects before Christie took office. Lawless said the board called an emergency meeting on Christmas week last year to approve $40 million worth of economic development initiatives.

Matheussen denied the claim that the timetable was built, or that politics were at play, but said, “A lot of economic development money was spent at the end of 2009.”

He said the charter of the DRPA allows for economic development projects, but he’s for amending it. “I would welcome that,” he said.

Critics argue that economic development should be a second priority to maintenance of bridges and high-speed rail lines.

And Matheussen said today that $1 billion in capital improvements that haven’t been done for nine years (without ignoring safety concerns, Matheussen said), like bridge and PATCO line inprovements have been approved by the board. He also promised a 2 percent, $2.6 million dollar reduction in their budget.

Christie “made it very clear,” Matheussen said, that, as Christie’s press release states, “five reforms passed by the Commissioners at those meetings did not go far enough and did not comport with the directives stipulated in his July 29th and August 16th letters to the authority.”

The five include requiring biannual audits overseen by the Auditor General of Pennsylvania; requiring open and noticed meeting; implementing post-employment restrictions for commissioners, officers and directors; independent legal inquiry into “true-up” provisions in their insurance contracts; and prohibiting officers and employees from political activities while on duty or using their office for political purposes.

He said Christie did not ask for his resignation today, as Fox reported (and noted an apology at the press conference for reporting).

When asked why the reforms at the DRPA were only addressed once the media exposed the unseemly policies, then a veto from the governor, Matheussen noted payout of sick days that the DRPA adjusted, and said they have been working with investigators from the Pennsylvania Auditor General and Treasurer and the New Jersey Comptroller and Attorney General.

The AG’s office asked for EZPass records, including for Lawless. 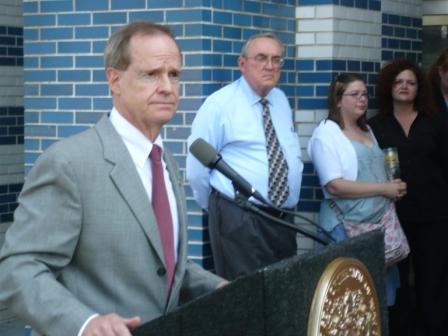