Coming up on a year in front of his re-election bid, state Senate President Steve Sweeney (D-West Deptford) downplayed the results of a Magellan poll that circulated recently in Gloucester County, which shows him upside down.

“It was an automated poll that’s just wrong,” Sweeney told PolitickerNJ.com. “My numbers are not upside down. I’m very comfortable with where I am.”

According to the poll, “the generic ‘local township ballot test’ finds voters preferring the Republican candidate to the Democrat candidate 40% to 35%. The ballot test for freeholder is a statistical tie, with Republican candidates Larry Wallace (17%) and Vince Nestore (16%) within the margin of error with Democrat candidates Robert Zimmerman (16%) and Heather Simmons (15%).  None of the four candidates are well known, with only 25% to 35% of likely voters having an opinion of each candidate.”

Sweeeney said he was unfazed by a fire blanket-style poll showing that Democrats are unpopular right now.

Gov. Chris Christie defeated Jon Corzine in Gloucester last year by four points as Assemblyman Domenick DiCicco also won, energizing Republicans who now want to use both men – and the governor especially – as a figurehead for future South Jersey success.

“Senate President/Gloucester County Freeholder Director Stephen Sweeney is another story. …Among all voters, 37% have a favorable opinion of him and 42% have an unfavorable opinion. Among Democrat voters 30% have an unfavorable opinion of him. It appears he has lost the public relations battle with Governor Christie in Trenton over the state budget, while negative stories surrounding the Gloucester County Freeholder Board’s repeated violations of the Open Public Meetings Law and the ongoing DRPA scandal have damaged him.”

Sweeney said he was just out in the field and his polling shows a much different result. 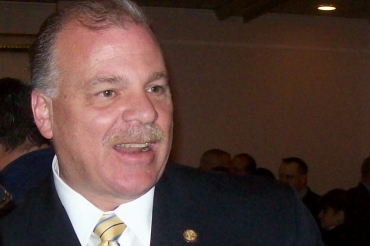