HOBOKEN – Mayor Dawn Zimmer is head of a reform movement in Hoboken, a movement that has caught so much momentum that some critics have anointed her the newest political boss in Hudson County. The City Council majority is working lockstep with the administration and Zimmer’s allies control the school board. She has inroads with Hudson County Executive Tom DeGise through Council President Carol Marsh and Councilman Michael Lenz.

And although she’s been cozy with Gov. Chris Christie – a major leap of faith in a strictly Democratic area – she’s yet To see any political retribution from the likes of Hudson heavyweight State Sens. Nick Sacco and Brian Stack.

But calling Zimmer, who lost a mayoral campaign last year before winning on the tails of Peter Cammarano’s arrest, a political boss – in Frank Hague territory, nonetheless – is still a stretch.

Yes, her team ousted Hoboken Democratic Committee Chairman (and Assemblyman) Ruben Ramos and replaced him with Councilman Ravi Bhalla, an attorney, political player, and the first Sikh elected to office in New Jersey.

Yes, she’s overhauled city boards and cracked down on excessive tax abatements, but her reform movement is still fledgling and vulnerable.

Last night, “Boss” Zimmer was put to the test over the pending layoffs of 18 police officers and demotion of 19 others. She’s also laying off 18 municipal workers, but police argue that the city’s budget surplus – $11.8 million, most of which is earmarked for tax relief – should be enough to save jobs and preserve the high level of public safety that Hoboken enjoys.

Over 100 police supporters packed City Hall last night – donning bright yellow tee shirts with “Stop the Zimmer Police Layoffs” across the front –  for a meeting that dragged on until 2 a.m.

Councilwoman Beth Mason, who ran against Zimmer for mayor last year, proposed a resolution for the administration to rescind the layoff, which was met with a “that’s illegal” press release from Zimmer’s administration today.

“The resolution clearly crosses the line that separates the roles of the governing body and the administration, and is a patent attempt to usurp the role of the administration,” the release states. (Hoboken is a Faulkner Act city.)

And even after sitting through tear-jerking personal stories from cops facing the unemployment line, rousing counterpoints from union leaders, and some veiled and not-so-veiled threats against the administration, Zimmer didn’t seem to budge according to her release today: “As Mayor, I represent everyone in Hoboken – those who were in the room last night and those who were not, and I have made these difficult decisions with the best interests of all Hoboken residents in mind.”

At the meeting, state PBA President Anthony Weiner said of the 1,000 police layoffs statewide, “The last place I thought I’d be is Hoboken.”

Zimmer’s layoff plan is based on a state audit conducted last year recommending nearly one third of the force be eliminated.

Local PBA President Vince Lombardi said of the plan, “It’s not because she has to, it’s because she wants to.”

“We’re saving money for a rainy day,” he said of the $11 million budget surplus, a side effect of a state fiscal takeover that hiked taxes to fill a budget short fall. “Wake up. It’s a thunderstorm. It’s a hurricane.”

“They basically said (layoffs) are a part of negotiations,” he said. “They’re tripping over (themselves).”

New Councilman David Mello, a school teacher and lawyer, said he doesn’t think any of the language at the meeting crossed the line, and noted that the council isn’t a party in the negotiations, as Lombardi is.

And he said Lombardi also toed the line last night with his comments.

The council stuck down a police contract negotiated by a state monitor before the state pulled out of Hoboken this year. Since then, neither side has moved much.

Sources in City Hall think the winds of anti-union sentiment spreading across the state may give Hoboken leverage, plus arbitration isn’t what it used to be.

Mello said today that, as a school teacher, he understands why police would want more bodies to give the best protection they can; he feels the same way about schools.

But Mello said the question for the administration becomes whether the extra cops are a necessity or a luxury. Zimmer is making the case for the latter.

Although many cops who took the microphone last night argued their points in conversational tones, others became incensed and some made veiled threats at members of the administration. One policeman, in particular, was especially angry.

Josue Velez, who just returned from an Army tour in Iraq this July, is one of the cops whose jobs are on the line.

Dressed in his fatigues, he was upset that he can’t marry his girlfriend because his job is up in the air. He took out his frustration on Zimmer.

“This is borderline terrorism,” the obviously distraught Valez said.

“I took an oath to protect the city of Hoboken from all threats, foreign…,” he said – then pointing at Zimmer sitting a few feet behind him – “…or domestic.”

Last night, Zimmer sat through this and other accusations, an unlikely boss, but maybe a new breed. 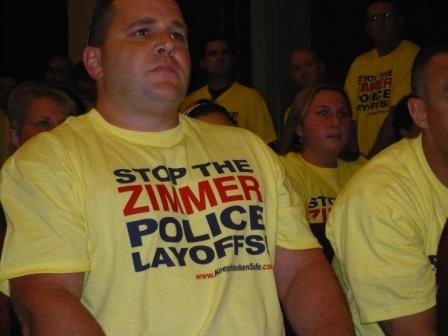