Emerson Police Chief Michael Saudino is revving up his race against Bergen County Sheriff Leo McGuire, fueled by an internal poll that has him only three points behind the popular McGuire and by endorsements from the chiefs and the rank and file – the Bergen County Police Chiefs and PBA.

But just like a cockroach, some bad news just refuses to die. Leave it to politics to keep the roach on life support.

Just as over the summer when he faced former ATF agent Dominick Polifrone, court documents from Saudino’s 1988 divorce proceedings from his former wife, Linda, are being circulated by unknown sources.

In a complaint filed by his then-wife, she alleges “extreme cruelty” at the hands of Saudino, including physical and mental abuse.

Linda Saudino has since penned two affidavits to the contrary, stating that the inflammatory comments were “the product of an attorney angling for the best and fastest results.”

For his part, Saudino denies the alleged abuse.

“Even if I didn’t have affidavits, these are just allegations,” Saudino said today. “Never was I ever physically or verbally abusive of my wife.”

The divorce complaint filed by Linda Saudino 22 years ago said, “During our marriage the defendant physically abused me” and “on a number of occasions he threatened that he would not give me any more money to support myself.”

“Throughout our marriage the defendant criticized, verbally abused, degraded and humiliated me,” she stated. “I was physically reprimanded for asking or doing whatever the defendant did not approve of.”

The claims were disputed by Michael Saudino in his filings at the time, but were never heard in court since the two parties agreed to a settlement.

The affidavits were written this year, leading up to the Bergen Republican party convention.

“I called her and told her what’s going on,” Saudino said, after the files were passed around inside the party.

She wrote the first affidavit at his request in February, stating, “Yes there were trying times while going thru our divorce, but Mike never ‘beat me up.’”

The second sworn statement was released in March at the behest of GOP leaders looking for a more direct contradiction to the allegations on file.

“Mike was never physically abusive towards me at any time during our marriage,” she said in the second statement.

“Would I call this a skeleton? No. It’s part of the game I guess,” Saudino said. “There’s probably mud I could sling. I won’t go there.”

“I even looked at the claims that I put in my divorce claim,” he said, including his wife calling him a “no good bastard” on Christmas in front of his mother.

“I laugh at these things now,” he said.

Happily re-married, Saudino has a cordial relationship with his former wife; they see each other at functions for their son, like his recent birthday party.

“Michael Saudino’s first marriage failed,” he said. “It’s more than 20 years ago (…) Bitter things are said during divorces, but it has been repudiated.” 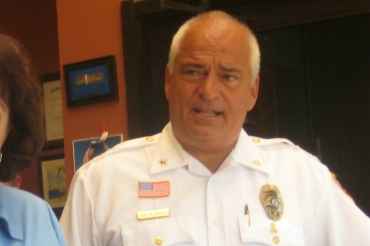