HAWTHORNE – The GOP sheriff’s campaign of Felix Garcia raised between $15,000 and $20,000 last night at a 300-person sushi bar event in Totowa, according to Garcia campaign spokesman George Cole, but Democrats are still eyeballing another considerably bigger stack of unspent campaign cash.

Scheduled tonight to go to a beefsteak for 8th Congressional District candidate Roland Straten at the Brownstone, Hispanic Heritage Day in Paterson and a VFW event in Passaic, Garcia said he remains confident in his bid to stare down Clifton cop, Democrat Richard Berdnik. The men are vying to replace former Sheriff Jerry Speziale, who hit the eject button on his re-election bid to take a job at the Port Authority of New York and New Jersey.

Democrats want Speziale to reimburse angry donors who thought Speziale was going to be sheriff again when they happily contributed to his campaign. They didn’t expect him to leave in the middle of the race to accept an appointment by Republican Gov. Chris Christie.

Last Friday, Passaic County Democratic Chairman John Currie fired off a letter to Speziale’s campaign treasurer Linda George, specifically requesting that the former sheriff pay the Democratic Committee $37,000 for signs and other costs associated with his re-election. On the day he announced his resignation from the sheriff’s office, Speziale told PolitickerNJ.com in an email message that he intended to parcel the contents of his $1 million warchest out to deserving charities. Now, a source close to the former sheriff said he is prepared to relent and set up a system by which contributors can be reimbursed.

“A mixture of what’s right,” said the source.

Garcia, for his part, maintained a busy work rate.

“I think they have to sort that out themselves,” the Republican told PolitickerNJ.com as he buzzed through Hawthorne on the campaign trail this evening.

In response to Freeholder Bruce James’s charge of a possible quid pro quo initiated by Republicans to entice Speziale out of the sheriff’s chair he ruled with rock star status, Garcia said, “Remember, that job was in the works back when (Democratic Gov. Jon) Corzine was the governor. Speziale was looking for jobs in Texas and Florida.”

With a new body in front of him – the little known Berdnik, compared to name ID icon Speziale – Garcia said, “I’m the only candidate with experience in the sheriff’s office. I ran the jail and I was involved with the budget. The taxpayer does not need someone who has not worked there.”

Freshly ratified as his party’s nominee, Berdnik naturally objected to Garcia’s contention that he has more moxie for the job.

“I feel I am the better candidate,” Berdnik told PolitickerNJ.com. “My qualifications as a police officer are better than his. He’s been out of the jail for nine years. He’s lost touch with what’s going on there.”

As for Speziale’s money, “MY position is the people who contributed to him should be reimbursed,” the Democrat said.

Berdnik said he has two October fundraisers are already on his schedule: one on the 13th and a second on the 26th. 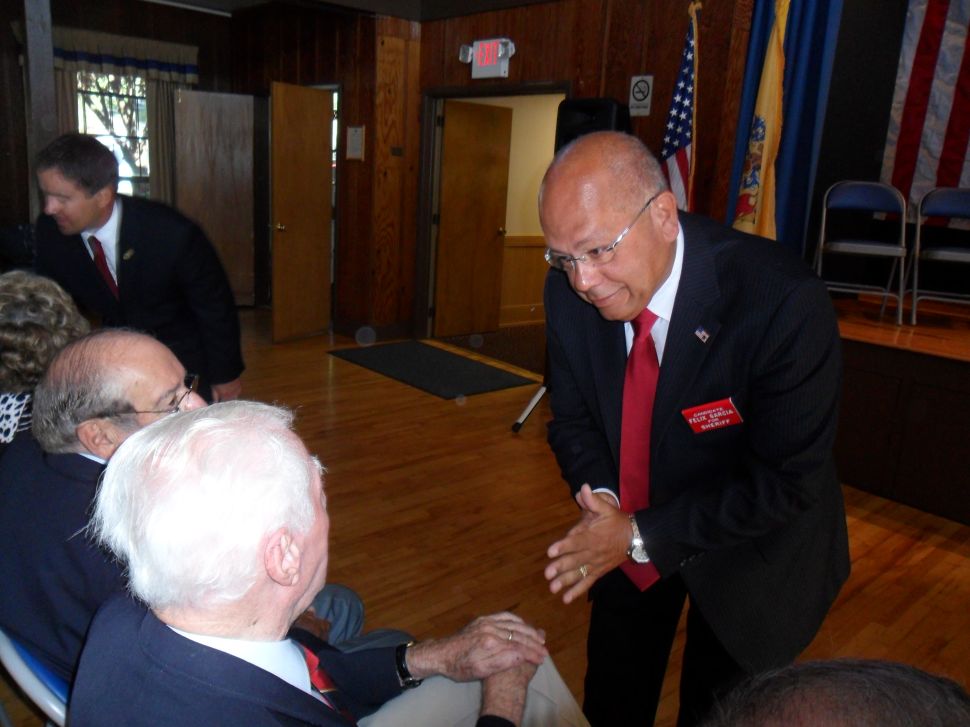