Standing amid the gizmos and detritus of one of the high-tech start-ups that are the hallmark of his time in Congress, U.S. Rep. Rush Holt, (D-12) kicked off his candidacy for reelection Thursday.

Holt began his speech, given at Princeton Power Systems in West Windsor, by telling the gathered supporters that with his small government approach to education and job creation and his denial of global warming, Republican challenger Scott Sipprelle was far too conservative for a time of economic crisis.

“His ideas are wrong and not in keeping with the values of the people of this district and he is out of touch with the residents of the 12th Congressional District,” Holt said.  “In short his policies, his positions add up to shoving the American dream farther out of reach for the rest of us and that’s simply wrong.”

Holt, 61, has represented the 12th District since 1999 and sits on the House Intelligence Committee, among others.  he Holds a PhD in Physics and has served in several academic and research positions including as a Congressional Science Fellow, and arms control expert at the U.S. State Department.  Throughout his tenure in the lower house, Holt has championed high-tech companies such as Princeton Power Systems and has been a main driver of the Einstein’s Alley econopmic development program developed to bring high-tech firms to central new Jersey.

The district is seen nationally as somewhat competitive but Sipprelle with $489,000 on hand as of the June 30 filing is well behind Holt, who boasts more than $1 million on hand.  More than half of the money Sipprelle has raised to date has come from his own checkbook.

Sipprelle has spent heavily already in the race, running television ads throughout the summer including a current one that accuses “Washington politicians” of treating their constituents like a “giant credit card.”

In July, Sipprelle was elevated alongside District 3 challenger Jon Runyan to “contender” status in the national Republican party’s Young Guns program.  Runyan has since been moved to full Young Gun status, while Sipprelle remains at the contender level.  while Sipprelle is running as an establishment Republican, he is expected to address the Middlesex County Tea Party later tonight.

To date, Holt has refused to debate Sipprelle, a common incumbent’s tactic.  In response, Sipprelle has taken to the district’s diners, hoping to spread his message “economic renewal.”

Last month, Holt received the endorsement of the New Jersey Education Association, not exactly a revelation as the union endorsed Democrats across the board.  But Holt’s focus on education and inovation, as well as his PhD in Physics lend themselves well to the education endorsement.

Sipprelle is expected to have the support of Republican Gov. Chris Christie, who has positioned himself as the darling of the right.  Christie’s star has been tarnished ever so slightly this week from his public feud with ousted Education commissioner Bret Schundler, who the governor fired last Friday.

Asked whether Christie’s star power and ability to help Sipprelle was diminished by the feud, Holt said only, “I wouldn’t want to be thrown under the bus by Chris Christie.”

“While businessman Scott Sipprelle offers detailed solutions to fix our economy, create jobs and control federal spending, Congressman Rush Holt resorts to a smear campaign of personal attacks and distortions to distract voters from his failed record during the last 12 years in Washington, DC.,” said Russell. “What else would expect from a career politician who will say anything to get re-elected?” 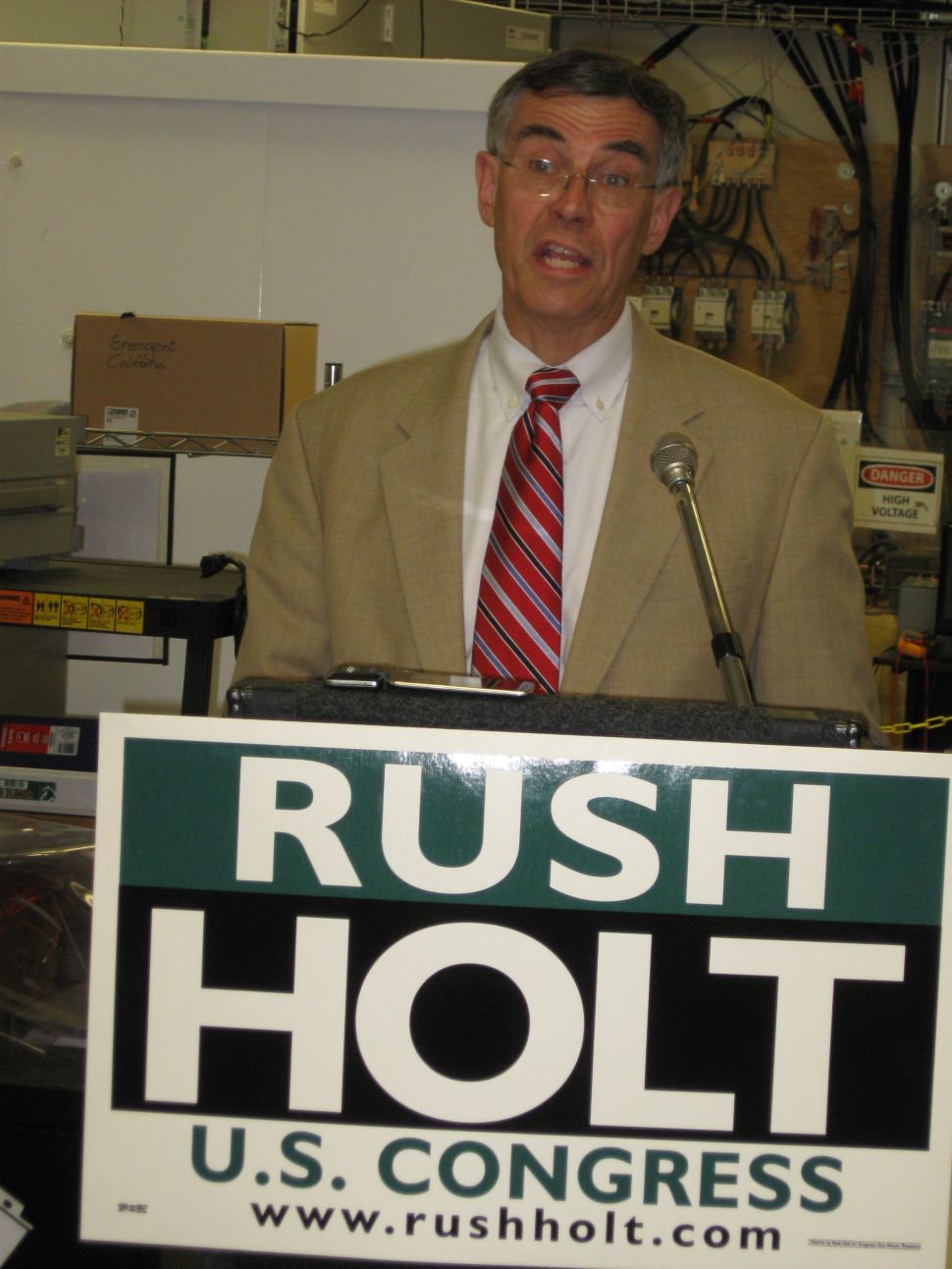