The longstanding arrangement between the casinos and the racetracks is ending: No casinos would be built in the north and Atlantic City would subsidize the purses in the north.

But as subsidy subsides, so does the agreement, say northern legislators.

Ready to convene at the Meadowlands today to discuss the issue, state Sen. Paul Sarlo (D-Wood-Ridge) said all it takes is one casino in the north, owned by the Atlantic City business interests and sharing revenue with the state.

“All we need is one,” he said. “One high-end, world-class casino, and let the casino industry run that.”

And even though the Dem-only gaming summit and the GOP-initiated Hanson Report have made these issues somewhat partisan, some northern Republicans, like State Sen. Jennifer Beck (R-Red Bank) aren’t following party lines, if one exists.

The need to “diversify the business model” is first and foremost, she said.

“Our meet this summer, if nothing else, it showed that the general public has an interest in horse racing,” Beck said. “You can privatize this industry. They can be self-sustaining.”

Until 2007, the horse racing industry in New Jersey was “not just (running at) a profit, but a windfall,” Beck said. Then Pennsylvania opened the flood gates with racing, betting, and now gaming tables. Then New York put on the push.

“The state of New Jersey didn’t respond,” she said. “New Jersey is to blame for sitting back and doing nothing (…) We had another one of the casinos default on the loan for one of their high-end shopping areas (this week),” Beck told PolitickerNJ yesterday. “The only thing that Atlantic City is going to have that (PA and NY) don’t have is the ocean and the beachfront.”

Internet gaming, off-track wagering, and account wagering need attention – “That’s all lost revenue” – but the big ticket-item, slots, is getting the most resistance.

“The only issue that is divisive is slot machines,” she said. “(Legislators from the south) have dug their heels in on this. Their lack of support for it has held things up.”

In order to save what was recently the second largest equine industry in America, and the $4 billion investment into it, Beck said bring slots to the north.

Conservative estimates, she said, with only a handful of slots in the north could bring between $600 million and $1.5 billion in revenue.

She makes the distinction about slots specifically, rather than video lottery terminals. Run through the lotto VLTs – computerized scratch-off games – are easier to establish because they don’t require constitutional amendment; slots do.

“If we’re going to do it, we should do it right,” Beck said. She’s also not opposed to having more than one gaming areas in the north.

“Maybe you do one in Warren County,” she said. “Try to recapture some of the business that’s going to Pennsylvania.”

Beck will be at the Meadowlands today, and she’ll be at the third gaming summit at Monmouth Park on Sept. 29.

Whether the Democrats want to hear what she has to say is another issue altogether; she asked to testify today, but was not given the go-ahead.

“Many of us aren’t happy that this non-partisan issue is being cast in a partisan light,” Beck said. Republican support, where it existed, for gaming in the north will remain, even though, “Some are more vocal than others.”

“For some of us, the issue isn’t new,” Beck said. “I don’t really care who gets the credit.” 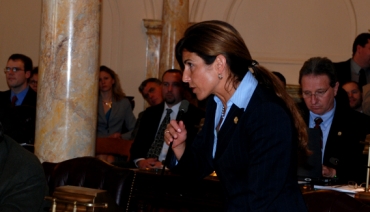