MOUNT LAUREL – In this competitive 3rd Congressional District contest in a Republican district, the forces of U.S. Rep. John Adler (D-Cherry Hill) came in here with their candidate tonight seeking as much contrast as possible given a controlled format established by the Burlington County Chamber of Commerce.

But it was contrast directed as much at Adler’s own party – and fringe left partisans – as the opposition.

“They’ve already seen the questions,” groaned an Adler acolyte by way of introduction, and moments later there was Adler, walking across the carpet in the DoubleTree Hotel and shaking hands with his Republican opponent, 6’7″ Jon Runyan, the former Philadelphia Eagles star who now wants to put House Speaker Nancy Pelosi (D-Ca.) in a rundown.

Presenting himself as a centrist in the face of Runyan characterizations that regularly brand him as a Pelosi extremist who votes with the speaker 90% of the time, Adler tried to outflank Runyan here by suggesting that his opponent is too far right for the district while the incumbent doesn’t mind challenging the leadership of his own party.

“We missed a tremendous opportunity,” said Adler, to a chamber question about the federal healthcare reform bills he opposed. “Speaker Pelosi and I had some bitter words about it.”

When nearly every public statement of his opponent’s linking his name with Pelosi, it’s time to throw up a hedge, or so seemed to say the congressman. He also didn’t mind sharing with the audience a snapshot of the half conversation he said he had with President Barack Obama when he criticized Obama’s healthcare plan.

“The fundamental problem is cost,” said Adler, returning the issue to his cornerstone argument about the need for political centrism in 3rd District representation and not hard party line positions.

“Republicans and Democrats didn’t come together to solve America’s problems,” he said.

Expanding on his right-left punchathon with a heavy emphasis – as a Democrat in a district that went Republican as far back as reconstruction before it elected him – on leftward-leaning targets, Adler took a buzzword shot at President Hugo Chavez, referring to “that bully down there who takes a shot at America whenever he can.”

Riding all that credit as an independent (and building on that later as he staked out a position to Runyan’s right on illegal immigration and quoted Ronald Reagan with a lump in his throat) – or so ran the logic of his argument, Adler then tore into Runyan.

“He’s for offshore drilling off New Jersey,” said Adler, standing next to the seated ex-football jock at the head of a small, packed room. “I think that’s a disaster waiting to happen. I like independent thinking, but not wrong thinking. I hope Jon reconsiders his position.”

Incredulous – and angry at Adler, he admitted in a pre-forum conversation with PolitickerNJ.com, for distorting his views in vitriolic mailers, Runyan said, “This is a 10th Amendment issue. I say let the states decide how they want to grow their economy. Now, Gov. (Chris) Christie is not in favor of drilling. But I believe domestic production of oil is the first step toward energy independence.”

Both men strove to emphasize working man roots: Adler as the son of a South Jersey man who owned a dry cleaner’s and died too young from overwork, and Runyan as the Flint, Michigan auto factory man’s son who made good on Midwest values with a professional football career.

“I love my country,” said the Republican. “But this country is not going to be the same country we experienced if we keep going down this path.”

Runyan presented himself as the more authentic inheritor of the American middle class spirit, packaging Adler as a career politician who during his time in Trenton “voted for over 100 tax and fee increases,” and then hedging with a quote from English Tory Margaret Thatcher when he said, “At some point you run out of other people’s money.”

In front of this pro-business group, Adler sprinkled his remarks with tax cut promises for entrepreneurs and small businesses, and tried to hit the center point when he described “angry people on the right who tell me I’m too liberal, and angry people on the left who tell me I’m too conservative; I think I’m right where I should be for this district.”

Runyan saved his Sunday punch for the finale.

“The challenge in this campaign is going to be to figure out who John Adler really is,” said the Republican challenger. “He’s held public office for 22 years and he’s already resorted to attacks on myself.

“He voted with Nancy Pelosi 90% of the time,” he reiterated, “and yet he calls himself an independent centrist. We have to change this and put citizen legislators back in office. The people with all the experience got us where we’re at, and I don’t think we’re doing very well.” 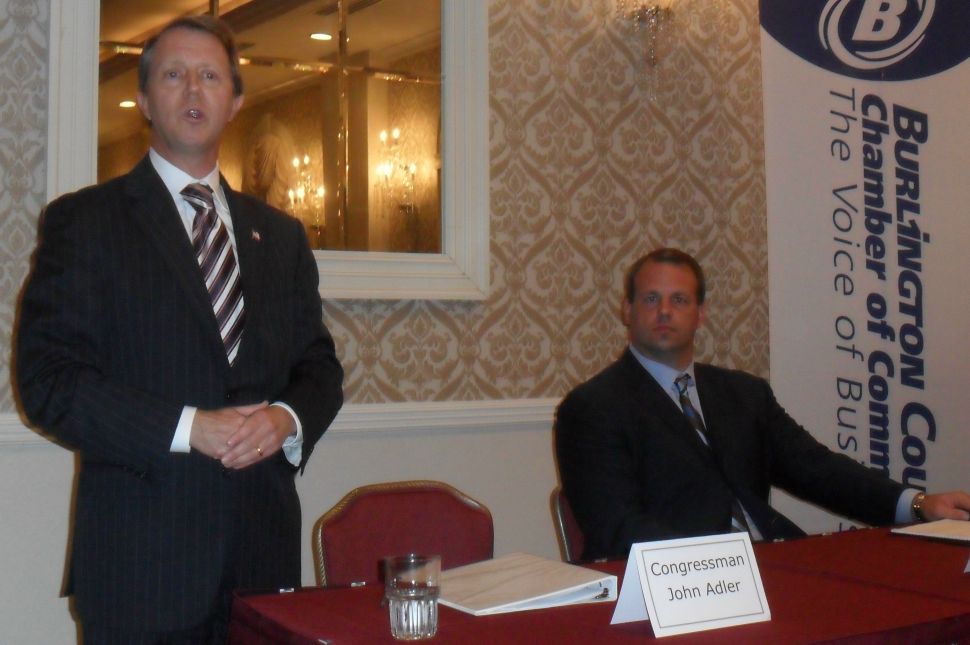