A federal indictment against former Newark mayoral candidate Clifford Minor today revealed that Minor made statements to a grand jury while he was running for mayor, news that shocked and infuriated his former, high profile running mate.

“I hope he’s cleared of the charges,” said at-large council candidate John Sharpe James. “But the indictment shows  that in January of 2010 he voluntarily came to federal authorities and made statements, and I knew nothing about it. He knew this was ongoing and said nothing to the team.

The FBI arrested Minor today on bribery and obstruction of justice charges going back to a 2007 case in which the attorney, a former Essex County prosecutor, is alleged to have bribed someone to take the rap for his client.

South Ward Councilman Ras Baraka, the lone member of the Minor team to win in the May election, was likewise stunned by the news of Minor’s arrest earlier today.

“I’m going to call him,” said Baraka. “I don’t know the whole story. I will read the whole story, I just heard from my father. It’s a shock. I hope all is not what it appears to be.”

A 59% to 35% loser in his May bid against Booker, Minor stood out for being subdued. He frustrated his fellow candidates and reporters alike with a campaign style that notably shunned fire-in-the-belly theatrics. Asked to comment on the burgeoning and incendiary muncipal utilities authority (MUA) debate at one point on the campaign trail as activists rallied in front of City Hall, a typically soft-spoken Minor demurred.

“This is their day,” he said, pointing to the masses mobilized on the sidewalk. 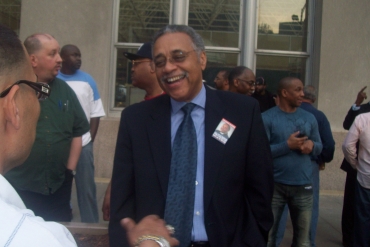