“After 22 years in elected office taxing, spending and borrowing New Jersey to the brink of bankruptcy and now voting with Nancy Pelosi more than 90% of the time to cripple our economy and drive us into record debt, career politician John Adler and his cronies in Trenton have stooped to an all-time low,” said Runyan, flanked by seniors in the backyard of Sal and Maryanne Mastroberti.

Paid for by the New Jersey Democratic State Committee, the mailer in question states in bold letters: “Jon Runyan will take away your Medicare benefits. It’s that simple.

“The end of Medicare benefits. When it comes to healthcare, multi-millionaire Jon Runyan just doesn’t understand the challenges facing seniors who live on a fixed income,” reads the offending opposition salvo, on letters superimposed over a dreary-looking Runyan. “Runyan wants to end Medicare and force seniors to buy insurance directly from insurance companies. …It gets worse. Jon Runyan’s campaign is supported by the same people who want to privatize Social Security.”

Runyan conceived the press conference in outrage over the mailers, but there is no morose mood discernible in this crowd of seniors as they mingle and cheerfully-crankily await the remarks of their Republican champion, a former Philadelphia Eagles star.

“It’s a sad day,” Runyan said to launch his prepared statement, “but I guess this is my introduction to New Jersey politics.”

At a sedate chamber of commerce square-off against Adler last night, Runyan voiced early irritation over the the mailer.

“Are you still having fun, at least?” asked a chamber type behind bifocals, studying the former offensive lineman at close range.

“There’s no other choice at this point,” said Runyan, in an organ timbered made even heavier with resigned laughter.

Now, a day later, the GOP candidate stood at the makeshift podium with the “Jon Runyan for Congress” placard stapled on it and did not stand on ceremony.

“He accuses me of wanting to end Medicare benefits,” said the candidate. “It’s a blatant lie. And he’s trying to draw a parallel from me to any Republican who’s ever said anything negative about Social Security. He needs to stop scaring the people and trying to get them to think twice about voting for me.”

The candidate on his website professes a desire to fix Social Security and Medicare, not scrap them, according to campaign consultant Chris Russell.

“Changing the eligibility or benefit rules for retired citizens, or those nearing retirement, is not fair and I will not support it,” says Runyan in an italicized quote ripped from his website and stuck in reporters’ hands Tuesday. “At the same time, with the system running out of money, Republicans and Democrats need to put their swords down and achieve a bipartisan solution that keeps Social Security and Medicare solvent for future generations. Those reforms should not include privatization, tax increases or benefit cuts, but must include reforms that eliminate waste, fraud and abuse that literally costs the system billions of dollars every year.”

The Adler campaign responded with a late day statement essentially alledging that the GOP bully got punched in the nose.

“Jon Runyan apparently has a short memory. In the spring, he set the tone for his campaign of negative attacks by viciously going after his primary opponent, and he has lied about John Adler’s record since announcing his candidacy,” said Adler spokeswoman Carol Gaskill.

“Mr. Runyan refuses to be specific about how he would improve Social Security and Medicare, two of the programs most vital to the health and well-being of seniors, although he says he does not believe in government-run health care,” Gaskill added. “Those who depend on these critical programs are right to be deeply concerned that Mr. Runyan plans to make his vaguely stated ‘cuts’ on the backs of those to whom our country has made unbreakable promises. Jon Runyan has not shown that he will be independent of party leaders, and seniors should know that he is being funded by party leaders that support privatizing Social Security and Medicare.” 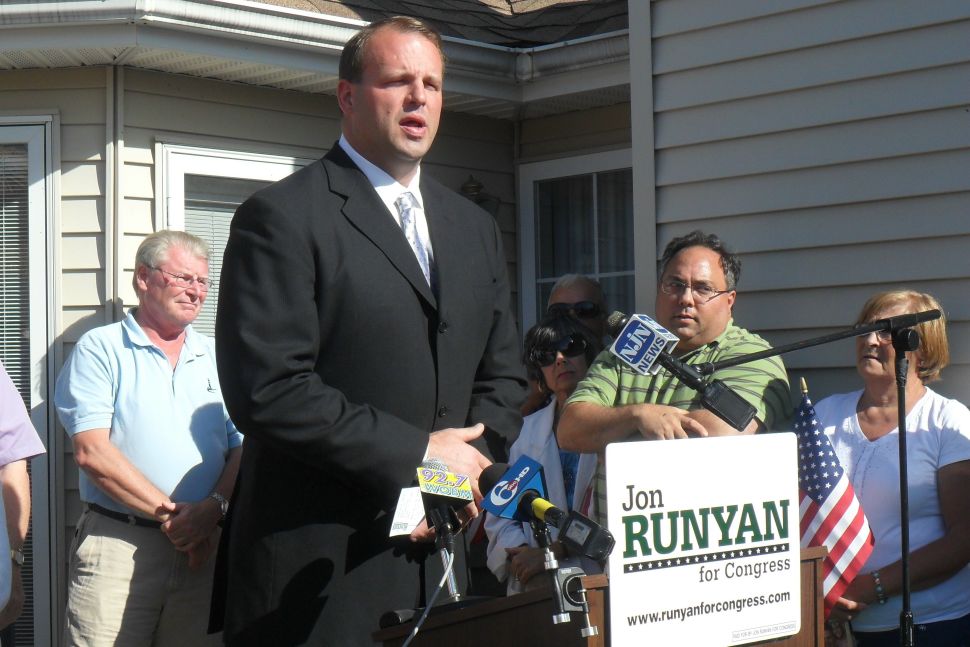