The men stand outside the farm, cameras in hand, shutters firing as they take pictures of the Republican candidate’s large house and sprawling grounds.

People inside the house see the men and give chase, eventually tying the photographers to the Democratic opponent’s camp.  The Democrats confess to sending the cameramen, but protest that they stayed on public property and did not trespass.

"They were instructed not to trespass. They did not. They were on the roadside," an aide tells the Star Ledger.

The campaign is simply taking pictures of the land that is assessed as farmland and so subsidized by state taxpayers, staffers howl. Police investigate, barbs are traded.

Sound like a recap of this week’s brouhaha in the 3rd District, where Democratic U.S. Rep. John Adler sent a volunteer to photograph Republican Jon Runyan’s farmland assessed land?

It’s a story that played out 17 years ago, when Democratic Gov. Jim Florio sent staffers to film Republican opponent Christie Todd Whitman’s 220-acre Tewksbury property.  Democrats hoped to make an issue of Whitman’s wealth and the farmland assessment on the land that saved the Republican thousands in property taxes each year.

Adler’s camp has been looking for traction in their attacks on Runyan’s home, running pictures of the sprawling mansion and accusing the ex-NFL lineman of buying one donkey to secure a $20,000 tax break.

Last week, Runyan’s camp said an Adler volunteer was photographing the home while the challenger’s daughter played outside, sparking outrage from the Republican, who filed a police report over the incident.  Adler’s camp responded with equal outrage that the photographer never left public property and that no pictures of any children or family members were taken.

Three months after her own run-in with the would-be paparazzi, Whitman scored an upset victory over the incumbent Democrat to become the state’s first female governor.  Will history continue to repeat itself? 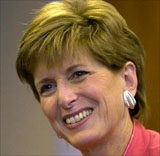